General Hospital (GH) Spoilers: Sonny and Michael Find Sabrina – Why Was Baby Dumped at the Quartermaine’s? 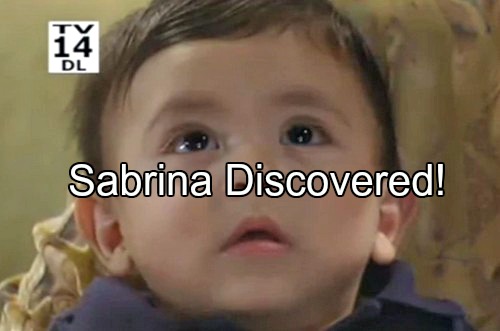 “General Hospital” (GH) spoilers tease that Sabrina Santiago (Teresa Castillo) will be back on this week’s episodes, Friday, May 20, and Michael Quartermaine (Chad Duell) and Sonny Corinthos (Maurice Benard) may be the ones that find her. But is Sabrina already in Port Charles?

Now that Carlos Rivera (Jeffrey V Parise) is dead, there’s no reason for Sabrina to avoid Port Chuck anymore. She didn’t want to testify against the father of her child, but Carlos is gone for good so Sabrina can return to the town she loves, right? Maybe.

GH spoilers say that Sabrina doesn’t know who killed Carlos and may be worried that her life is at risk because Carlos shared details with her about his illegal activities. Is Sabrina worried that she might be killed as well? That would explain why her baby was left on the Quartermaine doorstep.

Sabrina knows she can trust Michael with her son for safekeeping, but where is she? General Hospital spoilers ask if Sabrina is already in Port Charles but hiding out until she knows things are safe? Was it Sabrina that dropped off her baby at the Qs and rang the bell?

But how can Michael find out where Sabrina is hiding? GH spoilers tease that Michael makes a “daring move” after getting a clue about her. Looks like Michael will consult Sonny and tell him about the baby drop and they’ll try to figure out where she might be stashed.

GH spoilers tease that Michael and Sonny will get a lead on where she is and will try to find her. Carly Corinthos (Laura Wright) still doesn’t like all of this – but she never was a fan of Sabrina’s anyway. Sonny, however, is another story. He likes her.

Remember Carly told Sonny that no way was Sabrina the big love of Michael’s life. Carly still wants Mikey to get with Kiki Jerome (Hayley Erin) but that ship has sailed. Kiki is about to land another Q – Dillon Quartermaine (Robert P Watkins).

Sonny’s only concern with Michael and Sabrina coupling up was Carlos. Now that Carlos is not a concern, they can retrieve Sabrina and bring her home. Other GH spoilers revealed that Sabrina and Michael will be reunited but not without a cost – was that cost the loss of Carlos’ life?

How will Sabrina handle it when she finds out her baby daddy is dead? Also, were Carlos and Sabrina ever married? General Hospital spoilers tease that next week, Michael will find out all the terrible details about what went down after Sabrina delivered her baby and then had a post-delivery emergency.

Looks like it’s not been an easy road for Sabrina, but Michael will be there for her to help her put her life back together and is ready to be a father to little baby Rivera. We also wonder if Michael will have Sabrina on his arm for the Nurse’s Ball.

GH promo video spoilers show Michael, his dad and brother all done up handsome in tuxes at the Ball – but there was no glimpse of Sabrina, so we’ll see. What do you think GH fans? Are you excited about the Michael and Sabrina reunion? Can they work things out?