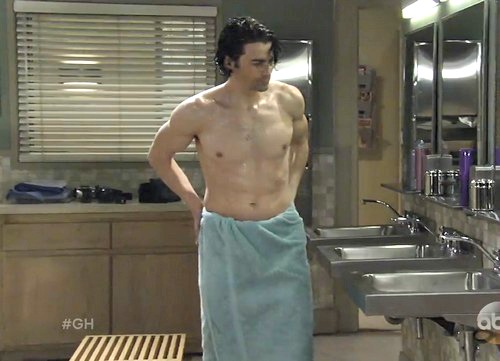 First we see Maxie Jones (Kirsten Storms) and Nathan West (Ryan Paevey) getting cozy in bed – but could their spark fizzle out once Maxie digs into Nathan’s past and finds out all about his ex-wife Claudette? GH spoilers tease Claudette is coming to Port Chuck – perhaps for May sweeps…

General Hospital spoilers indicate there’s no turning back for Sam Morgan (Kelly Monaco) and Jason Morgan (Billy Miller). That hot night they spent in bed is just the beginning for this reunited couple who will continue to explore their new found love both in and out of the bedroom as spring heats up!

We also get our first glimpse of Laura Spencer’s (Genie Francis) new romance with Dr Kevin Collins (Jon Lindström) and we’re wondering if it’s Laura pursuing the Helena Cassadine (Constance Towers) puzzle that leads her to the handsome doctor that becomes her new lover.

Alexis Davis (Nancy Lee Grahn) and Julian Jerome (William DeVry) are shown in a clinch in the GH spoilers video looking hotter than ever, but that marriage could go up in flames soon (and not the good kind) when Alexis figures out that Julian is back in the mob.

Dante Falconeri (Dominic Zamprogna) makes a move on Lulu Spencer (Emme Rylan) out at Wyndemere. The last time they got cozy, Lulu put the brakes on because she didn’t want to sleep in the same bed where he got busy with her cousin – but that’s no obstacle at the castle so it’s game on…

We’ll also get to see LOTS more of hottie Dr Griffin Munro (Matt Cohen) when he spends more time wet from the shower in a low hanging towel. Thank you GH!! We’re still wondering about that bullet scar that’s clearly on display while he’s mirror gazing at his own perfection.

Nina Clay (Michelle Stafford) and Franco (Roger Howarth) seem to be kissing and making up even though Nina was furious over their baby battle. But General Hospital spoilers say that if Dr Lee’s results are wrong, all that sack time the two will soon share could get the ball rolling on the baby Nina so desperately wants.

And is that Dillon Quartermaine (Robert P Watkins) checking out Kiki Jerome (Hayley Erin) as she leaves the hospital? Let’s face it, Dillon needs a gal and he’d be much better for her than her ex, but GH spoilers tease that Morgan Corinthos (Bryan Craig) really wants another shot with Kiki.

We also see in the video that Kristina Corinthos (Lexi Ainsworth) is full of questions for Sam but she refuses to offer any dirt on her love life and says she “doesn’t kiss and tell.” Sure Sam. It’s likely she’ll relent, though, and share some juicy tidbits with her prying little sister.

While this #GHSpectacularSpring promo focuses on love, romance, and intimate encounters, it’s clear there’s trouble brewing in Port Charles for many of these couples. Leading up into May sweeps we’ll see some heartbreak, breakups, and new romances blooming where others fall apart.

What do you think of this GH spoilers promo? Share your comments below and check back with CDL every day for more “General Hospital” spoilers and news.