General Hospital (GH) Spoilers: Week of April 4 – JaSam Does It All – Anna Backstabs Paul – Sonny Won’t Give Up 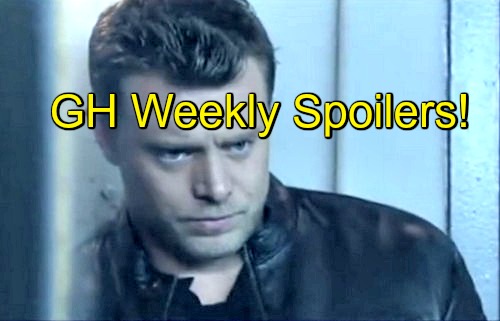 “General Hospital” (GH) spoilers reveal that on next week’s episodes from Monday, April 4, until Friday, April 8 Jason and Sam will make progress in their Hayden investigation but also find time to get cozy – plus Anna pulls a fast one on Paul while Sonny plays dirty games.

Jason Morgan (Billy Miller) and Sam Morgan (Kelly Monaco) start their week at Pentonville with questions for Shawn Butler (Sean Blakemore) about the shooting of Hayden Barnes (Rebecca Budig) but how much information will they get since Shawn was really gunning for Jason?

Sam is pursuing the theory that Hayden was the target and that means Shawn is innocent. General Hospital spoilers as if he will be left languishing in jail forever? Later, Jason and Sam are stunned by something Nikolas Cassadine (Tyler Christopher) tells them. Does he ask them to drop the Hayden matter?

Hayden’s blackmailing Nik with the truth about her shooting so that makes sense and Sam later has to ask Jason to lighten up on Nikolas. When Sam and Jason take a break on the investigation, that gives them time to heat things up and they’ll finally make love. GH spoilers tell us that JaSam is back on!

Curtis Ashford (Donnell Turner) has a busy week. First he’s got to break the news to Nina Clay (Michelle Stafford) that Julian Jerome (William deVry) is the Crimson saboteur. Curtis also goes to Nikolas to get a job. Is Curtis working an agenda for Hayden or himself?

Curtis is definitely up to something… Later in the week, Curtis will confront Nikolas. Is this about what he did to Hayden? Nina has to deal with Julian’s betrayal with his scheme to tank Crimson and then she gets a critical phone call – is this about her fertility?

Dr Hamilton Finn (Michael Easton) has to deal with Tracy Quartermaine (Jane Elliot) who won’t relax and allow the medicine to heal her. Later in the week, GH spoilers tease that Tracy lets us see a side of her we don’t often get a glimpse of and gets more time with her sons.

Anna Devane (Finola Hughes) turns the tables on Paul Hornsby (Richard Burgi) and takes control of the pursuit of Carlos Rivera (Jeffrey Vincent Parise). Paul will be stunned by Anna’s actions once he figures out he’s not the one in the driver’s seat after Anna thwarts him.

Michael Quartermaine (Chad Duell) talks to Dante Falconeri (Dominic Zamprogna) about how they can save Sabrina Santiago (Teresa Castillo) since he’s still convinced that Sabrina didn’t willingly take off with Carlos. Dante wants to call in the Feds.

Sonny hatches a new scheme – is this about Carlos? Or is he working Ava Jerome (Maura West) to try and keep baby Avery? Even though Julian flat busted Sonny on scaring Ava so he could keep Avery, Sonny isn’t one to give up easily and sets out on a new mission.

Ava finds another disturbing “gift” at her house and is scared again. She turns to Julian who is livid when he hears Sonny hasn’t stopped. Will Ava tell Julian she can’t bring Avery home because of this? And what will Julian do about Sonny’s ongoing antics?

Alexis Davis (Nancy Lee Grahn) gets in touch with Parker Forsyth (Ashley Jones) to talk about Kristina Corinthos (Lexi Ainsworth). Alexis still thinks Parker is influencing her daughter but Kristina will be stunned at her mother’s actions. Can Alexis smooth things over?

Share your comments below on all the hot GH action coming for next week’s episodes Monday, April 4, through Friday, April 8, and be sure to come back to CDL often for detailed daily “General Hospital” spoilers and news.