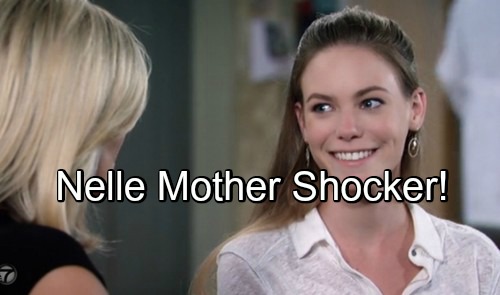 General Hospital (GH) spoilers examine several possible theories of Nelle’s history and ancestry in order to answer a big question on GH fans’ minds – Who Are Nelle’s Parents? General Hospital is doing a fantastic job with this storyline that has been playing for well over a year now.

Ever since Carly Corinthos (Laura Wright) found out that her best friend, Jason Morgan’s (Billy Miller) son, Jake Webber (Hudson West) was alive and not the kidney donor that saved her daughter, Josslyn Jacks’ (Eden McCoy) life, she has been on the hunt to find where the kidney came from and who it came from.

General Hospital spoilers know that Carly is definitely a Spencer at heart, she has never been one to follow direction. When she is determined to do something, come hell or high water, she will dig until there is no more dirt to dig! Even after her daughter begged her to stop the search and her ex-husband demanded her to stop, she continued. In true, General Hospital fashion, many key players were drawn into the story.

First we had Dr. Hamilton Finn (Michael Easton), who had no problem helping Carly with the list of GH staff that were working the night of the transplant, sneaking past Dr. O (Kathleen Gati) was just the beginning. Nina Reeves (Michelle Stafford), editor in chief of “Crimson”, helped by posting Josslyn’s story on their website. Curtis Ashford (Donnell Turner), a P.I. helped Nina sift through the responses and together found Nelle Hayes (Chloe Lanier) the one most likely to be the donor.

Of course, we knew that Carly could count on her Mobster husband, Sonny (Maurice Benard) who has many influential contacts, who also checked out Nelle’s story and found that she most definitely could be Joss’ donor. The only person who was determined for the truth to stay hidden was Josslyn’s father, Jasper “Jax” Jacks (Ingo Rademacher), which has made all involved question why he would be so resistant to something that would be good for his daughter’s health?

General Hospital Spoilers now have fans in a tizzy about who Nelle is related to, and that there are several possible theories. With Jax acting so suspicious, we cannot help wanting to know why? Speculation is running wild, about both her parentage and connection to various Port Charles’ residents.

1) There is an undeniable connection between Carly and Nelle. Fans are thinking that is because Carly is actually her mother. When Carly and Jax were together in 2008, it was revealed that Carly ended up having a late-term miscarriage. There is a lot of speculation that the baby survived and Jax knew about her, but hid her from Carly. Do you think that Jax would sacrifice his one child for the other?

2) General Hospital writers love to see us speculate, and many of the stories told, have some deep history that some newer fans may not know about. Maybe we have it completely wrong and Carly is not Nelle’s mother. Maybe Nelle’s parents are Courtney Matthews (Alicia Leigh Willis) and Jax. Just think about it for a second.

Courtney and Jax, obviously had to have embryos or at least her eggs harvested because they had already used Elizabeth Webber (Rebecca Herbst) as a surrogate once. Remember, Liz’ pregnancy ended after Carly caused a car accident resulting in the miscarriage of the baby? It would explain why Carly is drawn to Nelle, as Courtney was not only her best friend, she was also Sonny’s sister!

3) It could also make sense if Jerry Jacks (Sebastian Roche) is Nelle’s father. He could have very well had a relationship with someone and he left the child with her mother. Nelle says her parents were paid for her kidney; which her parents more than willingly accepted because of her father’s gambling debts. This is very plausible, as Jerry and Helena had a pretty “deep” business partnership.

Nelle would have been a familial match to Josslyn, and with Jerry being as ruthless as he is, it’s very possible he would have used his daughter’s kidney as a bargaining chip with Helena Cassadine (Constance Towers). Giving him the upper hand, forcing Helena to repay him by taking Robin hostage and keeping her hostage until she found a cure for the Jerry’s polonium poisoning.

4) Although this speculation seems a little far-fetched, General Hospital has been known to change history a little bit, so this should also be taken into consideration. Helena has had a vendetta with the Spencer family for decades, and when her son, Stavros (Robert Kelker-Kelly) had an obsession for Lulu Spencer (Emme Rylan), they had toyed with the possibility that he had taken her embryo and that they were having a baby together. No one knows for sure if this came to fruition or not, but it would explain how Nelle was a match for Joss. Obviously the genetics work but the timeline fails miserably with this particular theory!

General Hospital spoilers keep us jumping from one thought to the next. We cannot be sure yet, but CDL will be keeping a close eye on this story. We promise to keep General Hospital fans up to date. Be sure to check back often for all you GH spoilers and news!