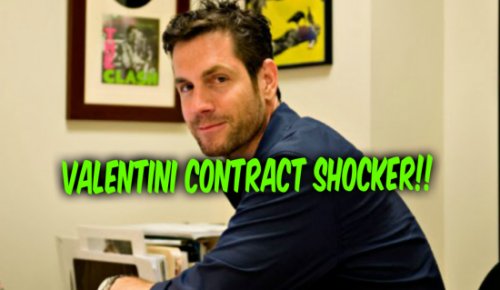 New General Hospital (GH) spoilers reveal that GH executive producer Frank Valentini has landed a sweet renewal deal that will keep him at the ABC soap for years to come. This will be a shocker for many GH fans as the show has hit a sour note after recent cast cuts.

Valentini has been with General Hospital since 2012 when he came in to replace Jill Farren Phelps who went to The Young and The Restless (and of course she was canned from Y&R recently and replaced with Mal Young).

Not only did Frank Valentini land a multi-year deal, but co-headwriters Shelly Altman and Jean Passanante recently signed on for contract renewals. Valentini has an interesting past in the soaps and worked under legend Agnes Nixon, the legend who recently passed away.

I’m incredibly lucky to have had the honor to work with and know you. This was from a #OLTL party in 2011. Great memories. #Legend pic.twitter.com/KIKTjm8NRe

Before coming to GH, Valentini was at One Life to Live where he worked his way from stage hand to executive producer learning how to run a soap from the ground up. GH has seen ratings rise under his tenure and a Daytime Emmy for Outstanding Drama this year.

GH has been slowly clawing its way up in the ratings but is still far behind The Young and The Restless and The Bold and The Beautiful – yet it’s far above Days of Our Lives which is faltering. Many GH fans have been upset about some of the recent show shakeups including actor losses.

In a way, though, Frank Valentini’s renewal represents stability for the ABC soap at a time when many fans are petrified that GH might be canceled. The recent closure of General Hospital in the story arc of the GH serial killer has fans in an uproar.

Social media has seen many in a panic seeing the GH closure as a sign that the show was shutting down as well. But with Frank inking a multi-year deal, fans should have some peace of mind that their beloved soap will continue on under Valentini’s tenure.

What do you think GH fans? Are you excited that Frank Valentini was renewed? Do you feel reassured that General Hospital will live on and that the soap isn’t going anywhere?

Share your comments below on Frank’s contract and check back with CDL often for the latest General Hospital spoilers and news.