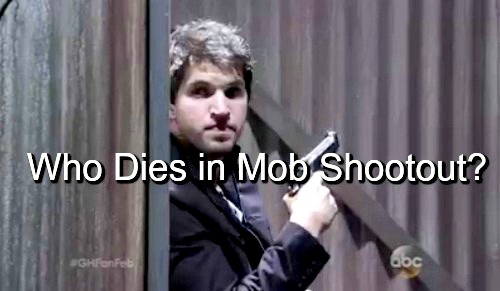 “General Hospital” (GH) spoilers indicate that Julian Jerome (William deVry) and Alexis Davis (Nancy Lee Grahn) will have a major shocker at their wedding when an armed gunman bursts into the ceremony and interrupts it.

The man fires off a warning shot and then chaos ensues. Sonny Corinthos (Maurice Benard) tries to shield Olivia Falconeri (Lisa LoCicero) since he’s sitting next to her. GH spoilers video reveals that when the gunman comes in, Nathan West (Ryan Paevey) makes a move.

So who is the interloper that shuts down the Julexis wedding vows? Is it Dixon – the mobrunner’s boss? Is it another gangster? Is this some sort of law enforcement sting? And it looks like Sonny Corinthos’ (Maurice Benard) big plan to stand up and make a big move will go awry.

Instead, it looks like Sonny will be held at gunpoint in his wheelchair. But when Sonny gets the chance, will he make a major play and spring out of the chair shocking everyone? What will Ava Jerome (Maura West) do when the violence spills over into the wedding? 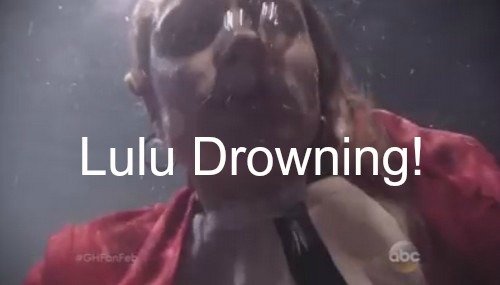 Lulu will be tied up and shoved off of her boat into the freezing water of the harbor. And even though Ava told Raj that Morgan Corinthos (Bryan Craig) would not be on the docks during the gun deal, he is – and he’s got a gun.

Morgan will be fresh off getting fired from the coffee warehouse by his father Sonny and is desperate to prove himself – plus he’s completely unbalanced because he’s off his meds and Kiki Jerome (Hayley Erin) just dumped him for cheating with Darby Collette (Jesica Ahlberg).

There’s a storm of violence brewing as Morgan lurks with a gun looking to make a big mob play – while Lulu is drowning and Paul Hornsby (Richard Burgi) is also at the waterfront checking on the gun transaction. Sonny and Ava, however, are both at the wedding – at least when the showdown starts.

GH spoilers video shows a physical confrontation between two men – and that someone is shot. Will Morgan shoot Paul? Lulu? Will Raj be shot? Looks like Dante Falconeri (Dominic Zamprogna) may get to the docks in time to save Lulu and revive her – and possibly revive their marriage as well.

But Morgan will come out of this in big trouble because he will shoot someone in his clumsy attempt to play Corinthos cartel big boy. Will Sonny’s dream come true that he stands and runs to help someone? Remember he had a vivid dream not too long ago about getting out of his chair when he was needed.

Don’t miss a moment of the three day Julexis wedding event that starts on Wednesday, February 17 and runs through Friday, February 19, no doubt with some spillover into the next week from all the fallout from the big bad mob shootout.

Be sure to check back with CDL often for more “General Hospital” spoiler and news.