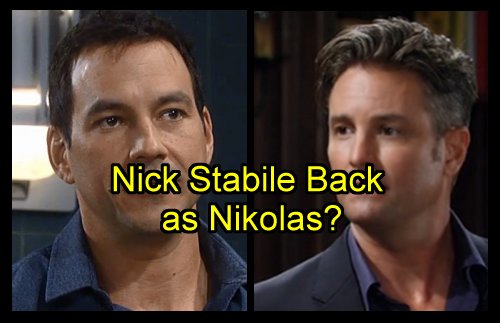 New General Hospital (GH) spoilers tease that GH showrunners might already have their eye on a new Nikolas Cassadine now that Tyler Christopher has confirmed he’s not coming back to the ABC soap. Will Nikolas be recast with Nick Stabile?

When Nick Stabile stepped in as the Cassadine prince while Tyler was in contract talks, the temporary recast drew both praise and criticism. The choice was deeply polarizing and people seemed to love or hate Stabile in the part. 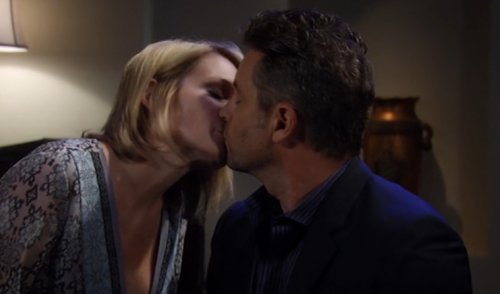 One thing that was clear is that with Stabile in the role, Nikolas and Ava Jerome (Maura West) had killer chemistry. Tyler Christopher’s interaction with Maura West was brief and they didn’t connect as well as Stabile and West.

It doesn’t make sense for TPTB at GH to leave Nikolas dead and gone – it needs a recast. Nik is attached to lots of storylines. Lulu Spencer (Emme Rylan) wants to pack her bags and head back to Cassadine Island to find her Stavros embryo. 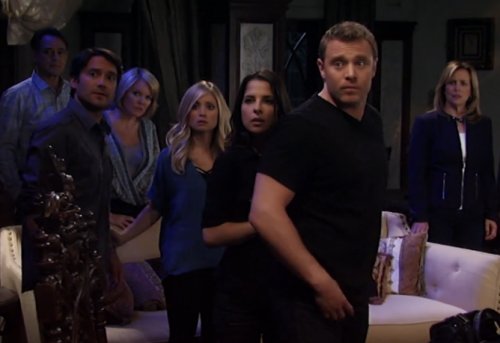 Elizabeth Webber (Rebecca Herbst) and Franco (Roger Howarth) were supposed to learn from Jake Webber (Hudson West) about his captivity on the island and head there too. Then there’s Nikolas’ mother Laura Spencer (Genie Francis).

She had hints left by Helena Cassadine (Constance Towers) that led her to the island but Kevin Collins’ (Jon Lindström) shooting made them hasten their departure with no answers and no closure on Helena’s secret message. 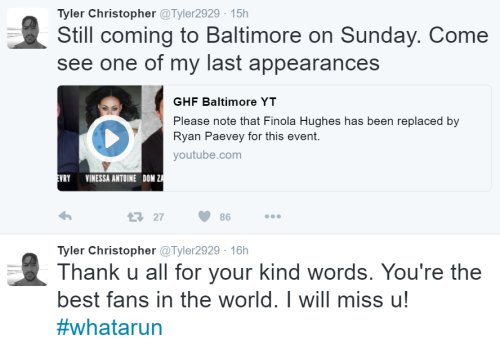 Now we know that contract negotiations between Tyler Christopher and GH led to the abrupt shutdown of these stories. This was deeply unsatisfying to fans. With Nikolas shot and presumed dead, it’s the perfect time for a recast.

At least if GH decides to use Stabile, fans will have continuity since that’s the face Nikolas had when he was shot by his Valentin Cassadine (James Stuart). Knowing that Tyler Christopher is gone for good, more fans might embrace Stabile as the recast.

Nick Stabile made it clear he’s open to the recast becoming permanent and retweeted tons of fan comments about bringing him back to the soap. Stabile added to one retweet: “I just heard that. I would love to go back. fingers crossed.”

Most of the tweets were tagged to hit the official General Hospital and Frank Valentini’s Twitter, so TPTB sees fan outcry to bring back Stabile, but will they act on it? The notion of replacing Tyler Christopher after a two-decade run is tough. 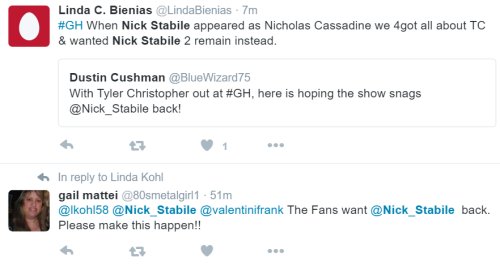 But Tyler has moved on to other projects so GH fans have to adjust to the new reality that the actor that originated the role of Laura’s oldest son is not coming back. That means a recast is inevitable and Nick Stabile could be up for the part.

Here’s what might be even harder for GH fans to stomach. General Hospital spoilers have swirled for months that Spencer Cassadine (Nicolas Bechtel) is about to be hit with a SORAS and the talented little actor will be replaced with a teenager.

We’ve seen them do it with Josslyn Jacks (Eden McCoy) who is 13 and should be six. It will be heartbreaking if we lose Nicolas Bechtel too. We might see a new Nikolas Cassadine, possible Stabile, return alongside a new Spencer.

That would be stunning. What do you think GH fans? Now that Tyler Christopher’s exit is confirmed, who do you hope to see as the recast? Nick Stabile? Someone all-new to the role? Share your comments below on this GH casting shakeup.

One factor working in Nick Stabile’s favor as the choice to replace Tyler Christopher as Nikolas Cassadine is that during this past week Bryan Craig (Morgan Corinthos) quit GH in a shocking move – and fans learned that Teresa Castillo was fired, and Sabrina murdered.

Needless to say many General Hospital fans are irate over Castillo’s firing and puzzled at how it seems TPTB are struggling and yet received contract renewals. It would be a quick win for GH execs to lock down a new Nik with Stabile and get filming so as not to lose even more continuity in many storylines.