General Hospital (GH) Spoilers: Liz Catches Hayden Up to No Good – Kristina Opens Up as Lesbian – Sam and Jason Heat Up 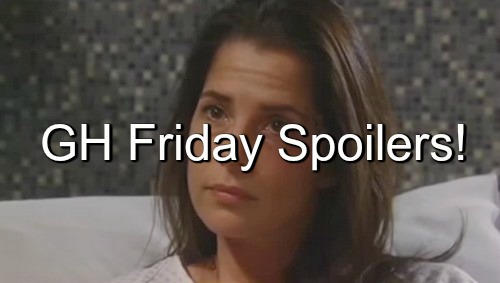 Sam Morgan (Kelly Monaco) is ready to get out of the hospital and go home but Jason Morgan (Billy Miller) wants her to stay put and heal up. Eventually, Sam will wear him down and it looks like Jason will care for Sam outside of the hospital.

This will lead to the big event JaSam fans have been hoping for that kicks off with a long-awaited and very steamy kiss. Will Sam and Jason finally get a long overdue Valentine’s night of intimacy? Sam’s been waiting years for this to happen.

Nathan West (Ryan Paevey) and Maxie Jones (Kirsten Storms) have big plans for Valentine’s and part of it is trying to reunite their BFFs. Looks like Nathan and Maxie may go all out to try and get Dante Falconeri (Dominic Zamprogna) and Lulu Spencer (Emme Rylan) back together.

But Nathan has an even bigger surprise for Maxie – he bought a ring and is ready to propose. Will Maxie say yes or hells yes? Can’t wait to see how romantic the proposal is! Looks like he will sweep her off her feet in a big way as he asks the big question.

Molly Lansing (Haley Pullos) talks to Kristina Corinthos (Lexi Ainsworth) about her life choices. Now that Alexis Davis (Nancy Lee Grahn) brought up that Parker (Ashley Jones) is a woman, Molly sees everything she read in Kristina’s diary in a new light.

Molly wants Kristina to confirm for her that she’s gay. Molly isn’t judging, she wants Kristina to be who she is and is trying to encourage her to come clean for her own best interests. Will Kristina admit she’s a lesbian and what’s been going on with her lady professor pal?

Lulu gets a visit from her mom Laura Spencer (Genie Francis) and Lulu advises her to not “go looking for trouble.” Is this about Nikolas Cassadine (Tyler Christopher) eloping with Hayden Barnes (Rebeca Budig) or something else?

Also looking for love on Valentine’s Day is Curtis (Donnell Turner) who’s out with Valerie Spencer (Brytni Sarpi) and Jordan Ashford (Vinessa Antoine) isn’t happy to see him cozying up to one of her favorite police cadets. Curtis won’t back down so Jordan warns Valerie away from him and says he’s bad news.

Liz Webber (Rebecca Herbst) continues on a very emotional path as she has to deal with the fallout from the mistakes of the past year and will soon be at a major turning point in her life. Liz decides to take Nikolas up on his offer and move herself and the other kids in at Wyndemere.

Jake Spencer (James Nigbor) has more recuperating to do at GH and will soon move to a new facility for further treatment. Hayden isn’t happy about Liz being there but can’t do anything about it. Things will get more uncomfortable when Liz catches Hayden up to something.

Molly and TJ Ashford (Tequan Richmond) have a talk about the state of their relationship. Will they take things further or call it off? Nikolas and Hayden will also heat things up to the steaming point but then something convinces Nik to hire an investigator to look into Hayden/Rachel.

Also, people begin to gather to hear the last will and testament of Helena Cassadine (Constance Towers). We know Laura will be there and Nikolas as well, but who else has been invited? This story promises surprises and will no doubt carry over onto Monday’s show.

Don’t miss a moment of the Friday February 12 episode for lots of cliffhanger action and check back with CDL for more “General Hospital” spoilers and news.