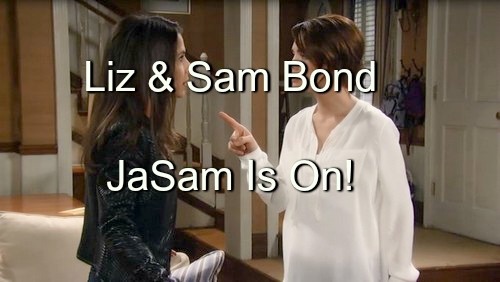 “General Hospital” (GH) spoilers hint that it could be the end of an era in Port Charles as JaSam finally triumphs and Liason is put to a bitter end once and for all. Liz Webber (Rebecca Herbst) will soon have a major emotional turning point that will see this all come to fruition.

Liz can no longer deny that she is to blame for most of this mess. Of course, she couldn’t know how deeply Jake Spencer (James Nigbor) was emotionally messed up from his time on Cassadine Island. But perhaps she would have known sooner if she wasn’t neck deep in lying to Jason Morgan (Billy Miller).

Liz was so focused on keeping Jake Doe in the dark about his identity that she didn’t see what was happening with little Jake. Liz just brought up the last time Jake got hit by the car and supposedly died, that she was distracted when it happened.

That day, Liz was reading Aiden’s paternity results and plotting what to do when Jake was hit. Liz told Jason a bit of the story, but didn’t tell him she was plotting against Sam Morgan (Kelly Monaco) at the time. But it lets viewers know where Liz’s mind is at – on her past mistakes with Sam and Jason.

Now with Sam in the ER, Liz opens herself up and all the blame comes crashing down. Jake overheard his mother repeatedly blaming and cursing Sam for her woes and he took it all as gospel and developed a fixed hatred on Sam.

No, Jake didn’t push her down the stairs – but that triggered the events that led Sam to the house that night. Sam came over to make peace with Liz since Franco (Roger Howarth) opened Sam’s eyes to what Liz is dealing with in losing Jason plus little Jake’s issues – even though it was all Liz’s own fault.

Sam already has her heart open towards Liz and now Liz will make a big move. When Liz saw Jason holding Sam’s hand in the ER and telling everyone he had the right to be there because he’s her husband, it finally all clicked for Liz.

She saw that they belonged together and she was an obstacle to their happiness. GH spoilers indicate that Liz and Sam will bond in a major and life changing way. Liz will tell Sam it’s all her fault and she’s horrible and Sam will admit she’s made mistakes too.

What’s interesting is that as Liz breaks down it will be her rival Sam that comforts her – and that act of kindness and understanding may be what makes Liz snap mentally – but is also a major milestone as Liz will step completely back from Jason so he can be with Sam without her in the way.

Liz and Sam will take major steps that put them in a place where they can co-exist peacefully alongside Jason since they are both raising his sons – and finally kill their rivalry. This is an interesting turning point for Liz’s character because it sets the stage for many possibilities.

With Rebecca Herbst reportedly in difficult contract negotiations, tying up JaSam vs Liason allows showrunners to write an exit for the character if the renewal talks fall apart. Or, if they can sign Herbst on to a new contract, it sets Liz up for a brand new storyline away from the endless love triangle.

Either way, Liason fans will have closure as Liz shuts the door on any chance that she and Jason can be together and will bless JaSam at long last. What do you think GH fans? Will you be sad to see Liason die once and for all?

Do you hope Rebecca Herbst is renewed and gets a new storyline and a new love? Share your thoughts in the comments below and come back to CDL for more “General Hospital” spoilers and more.