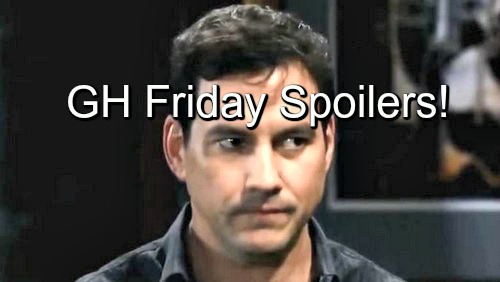 “General Hospital” (GH) spoilers reveal that time has run out on tomorrow’s episode for Hayden and Nikolas will learn the truth about his wife on Friday, March 25. Plus, Laura gets a peek inside the trunk, Anna gets a bit crazy, Paul tries to cover his behind, and Kristina stuns Parker.

Sonny Corinthos (Maurice Benard) owes a mea culpa to Epiphany Johnson (Sonya Eddy) for insisting she cover up his lies about his paralysis recovery. Sonny want to bury the hatchet and Epiphany agrees to let it go but gets sassy with the mob boss.

Meanwhile, will Felix DuBois (Marc Samuel) and Michael Quartermaine (Chad Duell) hatch a plan to find Sabrina Santiago (Teresa Castillo) so they can get her away from Carlos Rivera (Jeffrey Vincent Parise) to ensure her and her baby are safe?

Paul Hornsby (Richard Burgi) is increasingly worried that Carlos might prove problematic and reaches out to the wanted man to once again try and reason with him about coming back to Port Chuck to testify against Julian Jerome (William deVry).

Carlos tells Paul no way. But can Paul lure him back with the promise of a cash bonus? GH spoilers reveal that Carlos and Sabrina will be back on GH soon now that Teresa Castillo’s maternity leave is done and she’s shooting scenes again.

Also concerned with Carlos is Anna Devane (Finola Hughes) who is still tormented with the fact she shot him and he could put her away even though he killed her love Duke Lavery (Ian Buchanan). Talking to Michael and then Griffin Munro (Matt Cohen) has put Anna on edge.

She’ll lash out at Griffin and ask why he’s asking so many questions about Carlos and her emotions. Anna make an outlandish accusation that Griffin is lying about who he is and why he’s in town. Later she’ll calm down and decide her nerves were making her paranoid.

Griffin heads back to GH – looks like he and Sonny are overdue for a talk. Griffin will soon reveal himself to Sonny as Duke’s unknown son. How will Sonny take that? He already liked Griffin, so this should cement their bond.

Parker (Ashley Jones) kisses Kristina Corinthos (Lexi Ainsworth) back but then stops and tells Kristina that can’t happen. Kristina will accuse Parker of coming there so it could happen. Parker didn’t have to make the trip to Port Charles, she could have called. She must have wanted to see Kristina…

In the attic at Wyndemere, Lulu Spencer (Emme Rylan) cautions her mother to be careful with that trunk but Laura Spencer (Genie Francis) won’t be dissuaded. What’s inside the trunk surprises them – it’s a memento of a past love. Stefan maybe?

This sends Laura to see Scotty Baldwin (Kin Shriner) soon so she can find out more about the clue she was left and whether Scotty knows anything about Helena Cassadine’s (Constance Towers) intentions or what the old bat was hiding.

Downstairs at Wyndemere, it’s getting ugly. Hayden Barnes (Rebecca Budig) is on edge after Nikolas Cassadine (Tyler Christopher) caught her in a legal scheme with Diane Miller (Carolyn Hennesy). Hayden comes home and threatens again to have Liz Webber (Hayden Barnes) kicked out.

The bickering escalates and then Nikolas comes home to break up the fight. Hayden demands Liz and her brood be exiled from the castle, but GH spoilers indicate that Liz will play the Rachel Berlin trump card and Nikolas is stunned by the name, but why? Later, Nik calls Sam Morgan (Kelly Monaco) about this.

Don’t miss a moment of the Friday March 25 episode and then check back with CDL for more “General Hospital” spoilers plus a look at next week’s action in Port Charles with our week ahead GH spoiler.