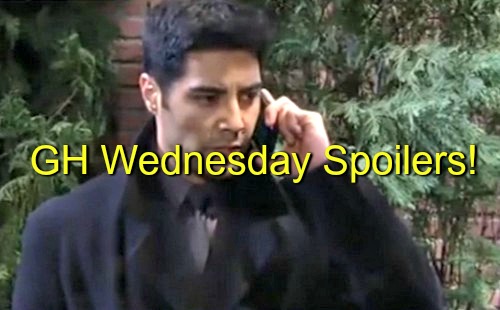 “General Hospital” (GH) spoilers for Wednesday February 17 indicate that Morgan has a bad couple of incidents that send him out of control plus Sonny is overconfident. Paul and Anna will face off – and all of this occurs as the Julexis wedding events ramp up to the big day.

Paul Hornsby (Richard Burgi) caught Anna Devane (Finola Hughes) red-handed, but she can’t be sure just how much of her phone call he overheard. Anna was discussing Paul’s daughter Susan with Mac Scorpio (John J York) but tries to cover what she was up to.

Anna then further throws Paul off by asking him out for a lunch date. Paul is intrigued by Anna even though he knows he should not be, but the man can’t help himself. Plus Anna needs to throw off his suspicions and wants to try and ferret more info out of the dirty DA.

Later, Raj makes a call – likely to Paul – about the upcoming arms deal. Raj says it needs to happen now if it’s going to go off. Is Paul worried about Anna’s interest in him and thinks she might blow the deal? Looks like he’ll give Raj the green light and that sets off some terrible events.

Lulu Spencer (Emme Rylan) announces she is moving out of Maxie Jones’ (Kirsten Storms) place now that Nathan West (Ryan Paevey) has moved in – they’re just too crowded in her little place with Rocco there too. Maxie thinks Lulu should go back to her soon-to-be-ex.

Lulu knows she and Dante Falconeri (Dominic Zamprogna) are making headway, but are not ready to reunite so she decides to move to The Haunted Star. Nathan later tells Dante what Lulu is planning and he doesn’t like it. Lulu will soon be in danger after she relocates to her boat.

Morgan Corinthos (Bryan Craig) is caught with his pants down, quite literally, by Kiki Jerome (Hayley Erin) as he’s giving Darby Collette (Jesica Ahlberg) a good time on a giant crate of coffee. Kiki freaks because she was dropping by to reassure him that it’s okay he can’t perform sexually with her right now.

She’s devastated by obvious evidence that he can perform – just not with her. Morgan tries to stop Kiki from walking out on him and tries the dumbest line of “it’s not what it looks like.” Half naked, pants down, another woman under him – yeah, it’s what it looks like.

Kiki dumps Morgan on the spot and runs out horrified and in tears. If the dumping wasn’t bad enough, Sonny Corinthos (Maurice Benard) finds out that Morgan was having a sex fest in the warehouse and fires his son saying he violated his trust.

This sends Morgan totally off the rails. He’s lost his job, his girl, and is already unbalanced because of the meds. What comes next is really bad. Sonny talks with Michael Quartermaine (Chad Duell) about baby Avery and his plan to get his daughter back under his roof for good.

Don’t miss any of the Wednesday February 17 show – Julian Jerome (William deVry) and Alexis Davis (Nancy Lee Grahn) prepare for their big day with their children on hand and everything seems great – but they are clueless that disaster is looming.

Be sure to check back with CDL after the show for more “General Hospital” spoilers and news.