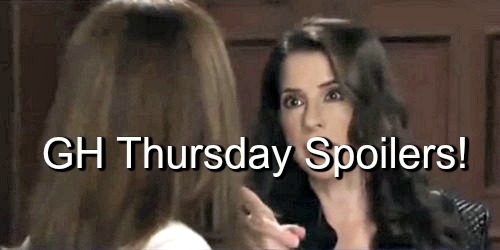 “General Hospital” (GH) spoilers reveal that Sonny and Michael will focus on figuring out where Carlos is on Thursday ‘s episode. March 10 Also more on Griffin stalking Anna, Jason and Monica bond then he gets a memory, and Hayden and Sam have a showdown.

Sonny Corinthos (Maurice Benard) wants to know everything that Michael Quartermaine (Chad Duell) found out from Felix DuBois (Marc Samuel) about where Sabrina Santiago (Teresa Castillo) might be. When Mikey wants to know why, General Hospital spoilers promise that Sonny stuns him with some big news.

Sonny tells Michael that Carlos Rivera (Jeffrey Vincent Parise) is alive and that Sabrina is on the run with him. Like Anna Devane (Finola Hughes) theorized, Sonny is sure Sabrina wants to be with Carlos, but Michael questions this, particularly when Felix just told him Sabrina really loved him.

GH spoilers tease that Griffin Munro (Matt Cohen) has worked up the nerve to come to Anna’s door and admit to the stalking, but can he explain why he’s doing it before she slams the door in his face? Or will their conversation be cut short when Griffin is called back to GH in a hurry.

Dillon Quartermaine (Robert P Watkins) tells his mom Tracy Quartermaine (Jane Elliot) that they need Dr Munro investigating her brain ailment – he doesn’t like Dr Mayes (Matt Riedy). If Tracy is really out of it, will Monica Quartermaine (Leslie Charleson) let Dillon make the call on who treats her?

Monica takes a field trip to the family crypt – likely because Tracy was just there – and runs into her son Jason Morgan (Billy Miller). He’ll have to explain why he has the plaque from his tomb. That’s a weird conversation starter, but Monica smooths things over.

Monica and Jason then talk about his past and the things Carly Corinthos (Laura Wright) told him about his history. GH spoilers tell us that Monica and Jason get some serious mom-son bonding done although the location is odd. As a result of their talk, Jason will recover a significant memory.

Jason recalls an encounter between himself and his grandma Lila Quartermaine. Is this the beginning of Jason’s memory coming back in full? Will it sway what he decides to do next with his life? Is Jason done with mob life and ready to join ELQ?

Sam Morgan (Kelly Monaco) decides she agrees with Liz Webber (Rebecca Herbst) on the Hayden Barnes (Rebecca Budig) issue and keeps up the investigation that Nikolas Cassadine (Tyler Christopher) told her to drop.

But when Hayden finds Sam doing something shady and knows it’s about her, things get physical. Hayden grabs Sam who gets angry that she touched her and we may see a Cassadine catfight. What was Sam checking out? Did she get any good info before Hayden caught her spying?

Nikolas talks to his mom Laura Spencer (Genie Francis) who is on pins and needles about the will reading of Helena Cassadine (Constance Towers). Nik tries to calm his mom down – he thinks there is nothing to worry about. Boy is he wrong!

At GH, Griffin will hit up Brad Cooper (Perry Shan) to help him with his Anna issues. Since Brad is lab manager, we’re wondering if Griff wants Brad to run a secret DNA test. Does Griffin think he’s related to Anna but needs proof? Brad is only too happy to bend the rules for the sexy new doc.

All this and more on the Thursday March 10 GH episode – watch then come back to CDL for more “General Hospital” spoilers and news.