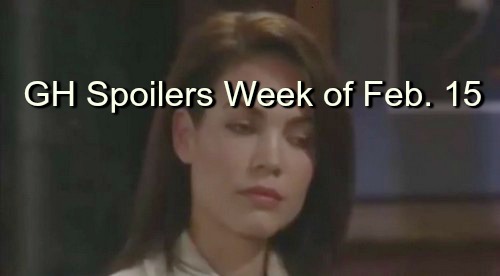 “General Hospital” spoilers for the week of Monday February 15 through Friday February 19 reveal an ABC sweeps week GH fans won’t soon forget! Below we see wedding details for Julexis, Jake gets the help he needs, Anna makes progress in her case, Morgan is out of control and Sonny makes a big move that goes bad. Check out what will happen in the week’s episodes.

Jason Morgan (Billy Miller) and Sam Morgan (Kelly Monaco) really heat things up but just how far will it go? She just survived an explosion – is Sam in any shape for makeup sex that’s been years in the making?

Later, Jason gets a disturbing phone call – is this about Jake Spencer (James Nigbor) or Helena Cassadine’s (Constance Towers) will or something else? Liz Webber (Rebecca Herbst) finds Hayden Barnes (Rebecca Budig) with her hands in Nikolas Cassadine’s (Tyler Christopher) cookie jar.

Liz rats her out and Nik has no choice but to launch a full scale investigation into his new wife – he’ll soon find out the shocking truth about who he married. What will Nikolas do with the information and when will Hayden let him know she’s got the goods on him about the shooting?

Maxie Jones (Kirsten Storms) thinks Nathan West (Ryan Paevey) is proposing, but it looks like there may be something else in that little black box. What could it be? And how mad will Lulu Spencer (Emme Rylan) and Dante Falconeri (Dominic Zamprogna) be once they get out of the hotel room?

Lulu decides to move out of Maxie’s and Dante doesn’t like her decision – later in the week, we find out the move puts her at risk. Sonny Corinthos (Maurice Benard) has a change in relationship status with someone in his life – who is it and is this a change for the better or worse?

Anna Devane (Finola Hughes) accepts Dillon Quartermaine’s (Robert P Watkins) invitation to be part of the Real Women issue of Crimson and uses the modeling gig as a chance to dig into Paul Hornsby’s (Richard Burgi) family history and back story from his son’s perspective.

Anna continues to toy with Paul who knows she’s doing it but can’t stop himself from enjoying it. Paul makes another shocking confession to Anna this week – and Morgan Corinthos (Bryan Craig) makes several shocking decisions one involving Darby Collette (Jesica Ahlberg).

Morgan is off his mental meds, spiraling, loses his job at his dad’s company, and may lose Kiki Jerome (Hayley Erin) too. Later, Morgan gets a gun to play mobster to show his dad what he can do and that sets off a stunning chain of events.

Olivia Falconeri (Lisa LoCicero) has a scary premonition that Julian Jerome (William deVry) will be in danger but will she ignore it or share it? This will be the point that the three day Julexis wedding event kicks off with lots of surprises and ultimately, disaster.

Alexis Davis (Nancy Lee Grahn) gets loving attention from her daughters as she gets ready to walk down the aisle and Julian hangs with best man Lucas Jones (Ryan Carnes). Lucas offers a touching tribute to Tony Jones, the man who raised him, then stuns Julian with an emotional father-son moment.

Jason and Liz will soon see Jake gets the help he needs at Shriner’s Hospital for Children after Liz and Dr Griffin Munro (Matt Cohen) disagree on his treatment suggestions. Sonny and Carly Corinthos (Laura Wright) will soon have to make tough decisions when it comes to Morgan.

The arms deal will go bad and erupts on Friday and will carry over another week as many people are caught in the crossfire. Olivia’s premonition about Julian may come true if he tries to help Ava Jerome (Maura West) with her mob problems.

The GH episodes for the week of Monday February 15 thru Friday February 19 will be action-packed. Watch every day then check back with CDL for more “General Hospital” spoilers and news.