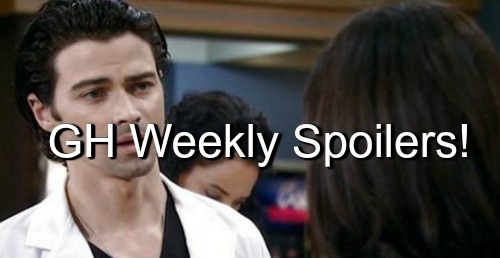 Looks like Kiki Jerome (Hayley Erin) has a long road ahead of her and her mom Ava Jerome (Maura West) wonders what fate awaits her for her role in all of this. Ava gets into a row with Paul Hornsby (Richard Burgi) and they antagonize each other.

Does Paul tell her about the immunity deal? Ava considers coming clean on everything to Jordan Ashford (Vinessa Antoine) – particularly about Paul blackmailing her into running guns. That would send Ava to jail for sure, but what about Paul?

Ava breaks down in front of Paul then later she has a surprisingly touching moment with Sonny Corinthos (Maurice Benard). Both are worried about Kiki and Morgan Corinthos (Bryan Craig) and it looks like these two may share a moment of peace – at least for now.

Sonny and Carly Corinthos (Laura Wright), though, are far from at peace. They must decide what to do about Morgan. Carly is increasingly rethinking how the mob has harmed her children. Morgan is in complete denial about how deep in trouble he may be.

Diane Miller (Carolyn Hennesy) is brought in and comes up with a plan to keep him out of jail. Morgan will be shocked by what Sonny decides should be done with him – is Morgan facing a time out in Shadybrook? Or something more surprising? Morgan is heartbroken.

Anna Devane (Finola Hughes) ponders her fate and comes to the realization that she could also be facing jail time for her actions. Andre Maddox (Anthony Montgomery) tries to reassure her but she’s not certain. Griffin Munro (Matt Cohen) seems overly interested in Anna. CDL General Hospital spoilers ask if Griffin could be the son of Duke Lavery (Ian Buchanan) and Anna.

Tracy Quartermaine (Jane Elliot) has a sit down with Hayden Barnes (Rebecca Budig) and they almost seem to be bonding but then Tracy has another of her “sit and stare” spells. Later, Tracy develops worsening symptoms. Could Tracy be on her way out at GH?

Dillon Quartermaine (Robert P Watkins) demands that she see a doc but Tracy is afraid the news will be dire. She consents to see Griffin and he checks her over but is baffled by what he’s seeing and not sure what’s going on. Is this poison or a fatal illness? CDL has suggested in GH spoilers that Larry Ashton (Hugo Napier) might have poisoned Tracy for reasons related to Hayden.

Sam Morgan (Kelly Monaco) chats with her parents about the wedding chaos and admits she hasn’t told Jason Morgan (Billy Miller) what went down. Sam will also admit this week that Jason’s danger is part of the attraction.

Sam also has a surprise for her parents – she sets them up a replacement wedding night so they can enjoy being man and wife. Their last wedding night turned into witness statements and police procedure, so that’s a nice gesture.

Sam will bring Danny to see his dad Jason in Philly this week at Shriner’s. Jason is thrilled they’ve come to see him but Liz Webber (Rebecca Herbst) is less so. She’s come terms with the idea in theory of Sam and Jason recoupling, but seeing it is hard.

Liz also wonders if being around Hayden is a good thing and questions whether Wyndemere is the place for her and the boys. Other visitors will show up this week – Nikolas Cassadine (Tyler Christopher) may bring Liz’s other boys to visit.

Franco (Roger Howarth) also shows up to surprise his new BFF Liz with a supportive visit. Liz finds Franco helpful and kind and sees him as a friend and part of her support network. Jake Spencer (James Nigbor) likes Franco too.

Meanwhile, Franco is not happy about kids in another facet of his life. Looks like Nina Clay (Michelle Stafford) is going full steam ahead to start a family and doesn’t care what Franco wants. Are they about to hit a breaking point?

Maxie Jones (Kirsten Storms) has advice for Nina – is it about Franco and her biological clock? Maxie also has to wonder about Nathan West (Ryan Paevey) since he whispered that he loves Claudette. Nina knows what this is about, but will Maxie ask her?

Will Nina give it away? Late in the week, Nathan ponders coming clean to Maxie and seeks out advice from Dante Falconeri (Dominic Zamprogna) on what to do. Lulu Spencer (Emme Rylan) tells Maxie to trust Nathan. Maxie, in turn, tells Lulu to get back with her hubby.

Lots happening this week – don’t miss a moment of the GH episodes this week Monday February 29 to Friday March 4 and check back with CDL often for detailed daily “General Hospital” spoilers and news.