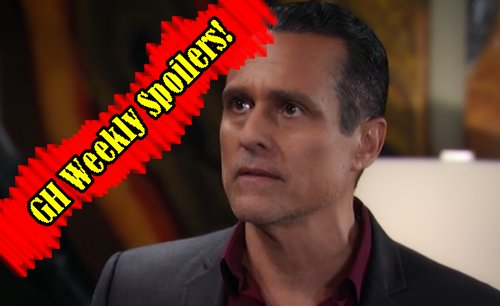 Hot General Hospital (GH) spoilers for the week of Monday, November 7 to Friday, November 11 reveal tensions leading up to Morgan’s funeral, Jason pursues a lead in the bomb case, Ava discovers her tormenter’s identity, and Hayden is in danger.

After Nelle Hayes (Chloe Lanier) hands over the journal she found that belongs to Morgan Corinthos (Bryan Craig), Carly Corinthos (Laura Wright) and Sonny Corinthos (Maurice Benard) talk about his last days written in his own words. It’s troubling.

Carly leans on Nelle as Morgan’s funeral nears. Sonny continues with his suicide plan and talks to Griffin Munro (Matt Cohen) about his sins. Griffin is concerned about Sonny and tells Carly. Josslyn Jacks (Eden McCoy) will sing at the funeral.

Nelle is concerned about Carly and turns to Michael Quartermaine (Chad Duell). Nelle becomes a source of comfort to the whole Corinthos clan which puts Nelle in position to advance her schemes. Jasper Jacks (Ingo Rademacher) is back for the funeral.

Jax sees something disturbing – is it Nelle up to something or Alexis Davis’ (Nancy Grahn) boozing? Liz Webber (Rebecca Herbst) asks a favor of Franco (Roger Howarth) and things are heated with them. Franco comforts Liz after she gets bad news.

General Hospital spoilers show Ava Jerome (Maura West) will be stunned when the person threatening her via text message is revealed. Also, Alexis’ bad behavior with the bottle leads to some serious consequences this week – is she driving drunk?

Other GH spoilers reveal Hayden Barnes (Rebecca Budig) steps into the “path of danger.” Does that mean she’s harmed by Alexis or this could be about Hamilton Finn (Michael Easton)? Finn and Laura Spencer (Genie Francis) help during a crisis.

Curtis Ashford (Donnell Turner) and Jordan Ashford (Vinessa Antoine) spark this week that leads to more down the road. Curtis gets new info on the bomb case. Sam Morgan (Kelly Monaco) and Jason Morgan (Billy Miller) have a new theory.

Max Giambetti (Derk Cheetwood) has insight for Jason on the order of events the night that Morgan was “killed.” An uninvited guest causes drama at the funeral – could it be Valentin Cassadine (James Stuart) that shows?

Nina Clay (Michelle Stafford) will do anything to have a family and she’ll turn to Valentin soon. Griffin gets bad news about the paternity test on Charlotte Bolland (Scarlett Fernandez) and Valentin will soon stake a claim on the girl.

Sam continues to worry about her mother’s drinking and Jax is concerned as well. Nathan West (Ryan Paevey) gets a letter from Claudette Bolland (Bree Williamson) that makes it clear she’s gone and leaves him shaking his head.

Kiki Jerome (Hayley Erin) is deep in guilt over what she sees as her role in Morgan’s death. Dillon Quartermaine (Robert Watkins) is patient with her. Dante Falconeri (Dominic Zamprogna) and Lulu Spencer (Emme Rylan) have a romantic night.

Dante and Lulu talk remarriage now that their embryo dream is dead after Daphne’s revelation. But GH spoilers tease that Jazmyn Skye Vale is on set shooting as Athena, Lulu’s embryo baby. FYI, Charlotte is not her kid. The timeline is all wrong.

Also this week – Parry Shen is back as Brad Cooper to deliver DNA results that wreck Griffin’s life. Kimberly McCullough exits as Robin Scorpio while Jax returns for a 10 episode arc that we hope will kill the kidney storyline once and for all.

All this and so much more happening on episodes the week of Monday, November 7 thru Friday, November 11. Watch, share your comments below on these weekly GH spoilers and check back with CDL often for more General Hospital spoilers and news.