General Hospital (GH) Spoilers: What Will Jason Do For Work – Partner With Sam In Morgan PI Firm? 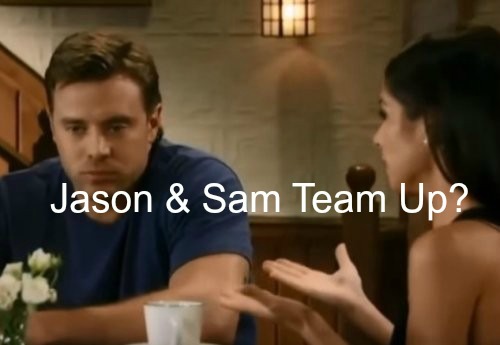 “General Hospital” (GH) spoilers tease that Jason Morgan (Billy Miller) will soon weigh his career options and decide what do with his new life. Even though he’s got fat stacks of cash saved up, Jason doesn’t want to be a lay-about and will look for gainful employment, but what will he do for a job?

There have been GH spoilers for a while that Sam Morgan (Kelly Monaco) and Anna Devane (Finola Hughes) might start up a PI firm. Since Sam and Jason worked the Nikolas Cassadine (Tyler Christopher) investigation while he was still Jake Doe, perhaps Sam will invite Jason to join them.

How about a new Port Charles private investigation firm called Devane, Morgan and Morgan? We haven’t seen Anna much with Jason, but it would be a fun dynamic and he’s obviously got the skills for it. But is PI work too close to shady criminal stuff?

Jason wants to make a clean break from his former life of crime. That means no working for Sonny Corinthos (Maurice Benard) either. Sam scored Jake Doe a job at the garage that Julian Jerome (William deVry) owns – maybe he’ll go back to that.

Jason seems to be handy with a wrench but he also may not want to work for Julian since he was a former mobster – plus, someone tried to kill him there. What else could Jason do for a living? Being a cop is out since he’s got a felony record, but he’d probably be good at it…

Michael Quartermaine (Chad Duell) gave Jason a job at ELQ working security back when he was Jake, but it doesn’t seem like a Quartermaine should be in a lowly position like that, but you never know. Jason might want to keep doing that – but the Qs probably won’t let him.

Instead, they might push him to take a higher-up position once they regain control of ELQ. Until they do, though, Nikolas probably wouldn’t hire Jason to take out the trash, much less as an executive. Carly Corinthos (Laura Wright) would give Jason a job at the MetroCourt, but he would never ask that.

What else is there? Flipping burgers at Kelly’s? Jason once wanted to be a doctor like his parents and was in college pursuing that goal when he had the initial auto accident that caused his first bout of brain damage that caused him to go all Stone Cold and into a killer.

Could Jason go back to college now and finish his medical degree? Monica Quartermaine (Leslie Charleson) would be thrilled – and saving lives would be a refreshing change for a man who spent so many years taking them instead.

A felony conviction doesn’t stop you from becoming an MD so that’s a plus. And since Jason has been shot so many times himself, he’d make a perfect trauma surgeon since he’s been there and done that many times before.

What do you think GH fans? What should Jason do for a living now that he knows who he is and is restarting his life? Share your career suggestions in the comments below and be sure to come back to CDL often for more “General Hospital” spoilers, news and updates.