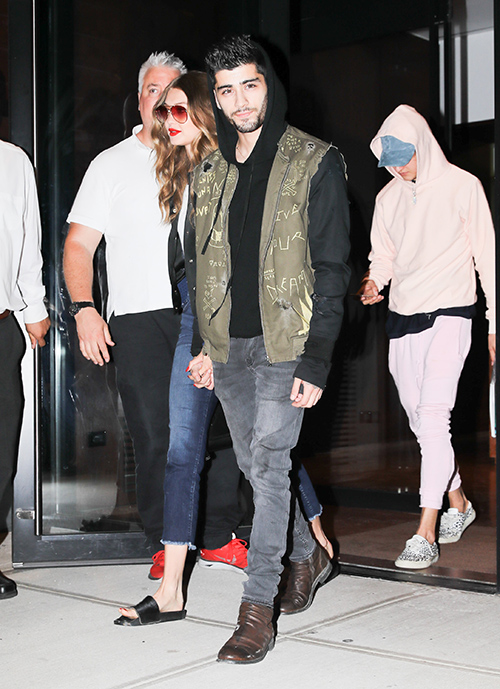 As Zayn Malik battles his solo artist anxieties, supermodel girlfriend, Gigi Hadid, continues to succeed in her career. Zayn Malik took to Twitter to make a public announcement about his mental health. Meanwhile, Gigi Hadid has been sighted on high profile photo shoots.

“She has been working hard on her craft since her modelling career began as a child. And now Gigi Hadid is definitely a sight to see,” reports Daily Mail. “The 21-year-old model was spotted posing atop a red sightseeing bus in New York City for her latest photo shoot on Monday.”

The report also pointed out that Gigi’s latest photo shoot was for Maybelline, the brand that named her the face of their company in January this year. In New York City, she was once again spotted out and about, this time dressed down in a white t-shirt, retro sunglasses, and jeans. However, this attire was not for a photoshoot but her meeting with boyfriend Zayn Malik for a party night.

Malik looked casual in his pair of jeans and army green coat while Hadid completed her nighttime appearance with aviator shades and a jacket. Zayn Malik and Gigi Hadid have been dating since November 2015 and took a brief time away from each other in June of this year.

Soon after Gigi’s 21st birthday, the couple hit rock bottom and made their breakup official. However, it didn’t take long for the couple to get back together, as Malik came out with his anxiety struggles, confessing to his followers and fans alike on social media. In response to his vulnerable state, Gigi extended her support with her own post.

“I’ve seen the battles you go through and the way you fight to get to a place that allows you to get up there for your fans. Your bravery in those times makes me proud, but your honesty last night proved what you’re all about, being real,” wrote Gigi Hadid on her Twitter post. Gigi Hadid and Zayn Malik confirmed that they were back together when he was fighting with anxiety issues. Since then, the couple has appeared to be going stronger than ever.

Malik and Hadid began dating last year soon after the model’s breakup with her then boyfriend, Joe Jonas. By April, the couple reported troubles in their paradise. But as love and luck would have it, the two are past their initial rough patch and look much happier.