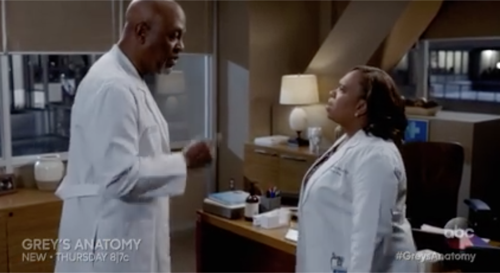 Did you watch the Grey’s Anatomy season 13 episode 6 where a familiar face returned to Grey Sloan, throwing many of the doctors for a loop?  If you missed it, we have a full and detailed recap right here for you.

On tonight’s Grey’s Anatomy episode as per the ABC synopsis, “The arrival of a new consultant puts all of the doctors on edge, especially once she starts stepping on toes in the OR. Amelia and Owen bring their personal problems into the hospital, while April explores some uncharted territory.”

Bailey and Catherine had reviewed the residency program at the hospital and Catherine apparently had a point when she said that there might be something off with the program. The older woman had said that too often she had seen their residents either frequently mess up or fail at the hospital before thriving in another environment. So one way or another Catherine did bring Bailey around to her thinking and together they had been forced to make a decision. The decision however, wasn’t an easy one because they both knew that Richard could come into serious trouble if the outside consultant they brought in had found out the real problem in the program was Richard.

Richard was unfortunately, the common theme with all of the failed and disgraced residents, but it turns out that he didn’t know that he could be considered the problem until Bailey brought in Minnick. Dr. Minnick was the outside consultant and she had showed previously that she was good at her job. So Minnick had been talked about and everyone had feared her when she came to the hospital. Though meeting Minnick herself wasn’t so bad. Her approach was admittedly a little different because she didn’t bother talking to the attendees and had instead approached the residents right away.

Minnick though had wanted to talk to the residents because she had wanted to find out from them what they felt was lacking in their education. So that helped her go straight to the problem. She had found out which doctors were holding back some of their students and she also learned that not all of them were given the hands-on approach to teaching that they should have. However, Maggie later found the little notebook that Minnick carried around and so she saw the list the other woman made of all the attendees. Minnick had created a listed in which she ranked the attendees based on what she heard from the residents.

But Maggie and some of the others had found out that the residents had backstabbed them. Maggie, it seems was at the bottom of the list meaning she was one of the worst teachers and Alex had been left off the list entirely. So there were some in the program that didn’t think Alex was an attendee anymore and there were others that put Jackson at the top of list yet he could have gotten there simply because he was pretty and so Maggie thought the list was stupid. Maggie had always been an overachiever and she didn’t think she deserved to be ranked so low when she had tried to do right by many of her students. And so Maggie eventually sought out Minnick.

Maggie had wanted to introduce herself and show the other woman that she wasn’t this horrible person that the residents thought. Yet, Maggie’s conversation with Minnick didn’t go as planned. Maggie had introduced herself and Minnick had called her the prodigy surgeon that she had heard so much about. So Maggie had thought she was going to start on the right footing however she didn’t expect that Minnick would end up being so blunt with her. Minnick had said that Maggie would be great as her doctor and not much else so she actually went on to detail what was wrong with Maggie’s teaching.

Maggie apparently was too quiet. She focused on the patients and rarely spoke to her own students so they didn’t think that they were learning anything from her. But Maggie hadn’t known that she was being too quiet so she didn’t know that she failing her students until Minnick told her so and Richard just happened to overhear it. Richard though was incensed. He thought that Minnick was going too far by dressing down the attendees and he already had one complaint about her from Meredith. Meredith had said that Minnick had criticized her teaching skills in the middle of surgery and that the watchdog had gone too far. So Richard had tried to take the complaints to Bailey.

Richard had thought that Bailey would understood that Minnick was pushing their doctors too far, but she had surprised him when she said that Minnick was just doing her job. Bailey had told Richard that medicine was changing and that the hospital needed to change it with it. So Richard had been disappointed when Bailey didn’t take his side and what she had said about Minnick had truly made him think his job wasn’t safe. However, Bailey had been just as upset about their disagreement and she had later needed Ben to tell her if she was making the right decision. And she was. Ben as well as many of the other residents, were finally getting their experience they deserved.

Though Minnick could be blunt if not rude to the attendees, she was great with the residents. Minnick had made sure that Stephanie didn’t go on the floor during surgery with Owen and Amelia, that someone spoke up for Ben during a surgery with Meredith the control freak, and she had also gotten Maggie to realize that she was a flawed teacher. So Maggie later tried to change the way she taught Leah and Minnick coached her through in a tough surgery. The surgery was a risky and the patient’s age also worked against them. And so Richard didn’t think that Minnick should be in the OR with Maggie and Leah although he had been overruled.

Bailey had okayed the surgery as a teaching lesson and Minnick did help the residents learn. She had gotten Maggie to step aside and merely talk Leah through the surgery. So Leah figured out on her own what she could and could not do. What she could not do for instance was he final part where she had to sew up the heart and so she did what she had been taught. Leah admitted she couldn’t do it and had her teacher Maggie step back in. Richard on the other hand, had also been in the surgery and he hadn’t want to step aside to give DeLuca a chance. Richard had felt that he shouldn’t risk the patient in a first-year resident’s hands and so Minnick took that decision away.

Minnick had purposely nicked an artery on the patient and that made DeLuca step up. DeLuca moved faster than the others and he had clipped the artery that just a second ago Richard had claimed he wouldn’t know how to do. So Minnick had proved her point and more importantly she had showed all the doctors that they needed to stop underestimating their own students. Though while many have showed that they hate the way Minnick interferes, tonight might not be Minnick’s last night. Bailey had eventually offered Minnick a job at the hospital and the other woman had said that she’s thinking about it however, she also warned Bailey.

Minnick had said that the hospital would hate Bailey if she came to work permanently and she also told Bailey that she worked alone. Minnick liked and respected Richard, but she couldn’t share authority with him and had to be the authority. So Bailey has a tough decision to make and Richard might find himself ousted from the hospital. However, change is in the air and no one can stop it. April was dating again, Richard was figuring out that the old ways had to change, and Amelia had finally told her husband that she didn’t want a baby.