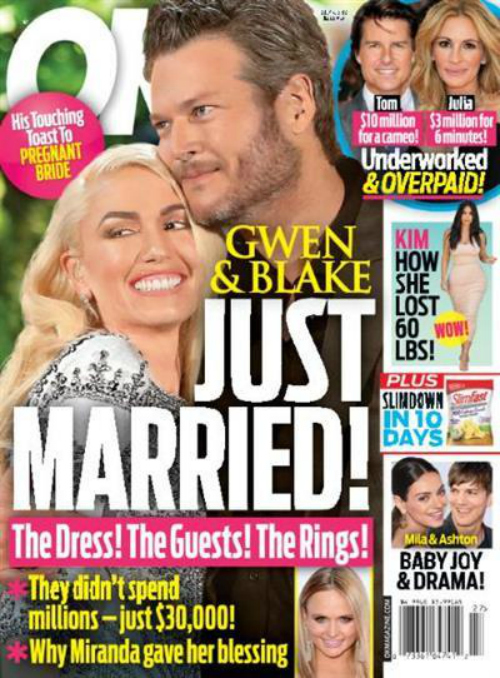 Gwen Stefani and Blake Shelton got married according to OK! magazine. It has been reported that the singing world’s “it” couple, got hitched in a secret ceremony back in March at Blake’s Oklahoma ranch.

The story can be found in OK! magazine’s latest issue which hit newsstands this week. Gwen Stefani’s sons supposedly served as ring bearers and the two had a small group of selected friends and family in attendance.

Blake Shelton was said to have given a toast to his new bride Gwen Stefani. Some of the celebs on the short guest list included Adam Levine and Jessica Alba.

But that’s not all OK! is saying. A source says that Gwen is several months into a pregnancy with Blake’s daughter. Of course, many tabloids claimed last year that Gwen was having twins by Blake and she clearly wasn’t preggers.

Ever since the couple started dating off and on earlier this year, they’ve been plagued by pregnancy and baby rumors. But this time, reps for both Gwen Stefani and Blake Shelton deny the marriage and pregnancy talk.

Then again, celebrity denials are often total fabrications. But the kicker is that Gwen Stefani is still legally married to Bush front man Gavin Rossdale. So even if Gwen and Blake Shelton were married, it wouldn’t be legal.

Gwen would actually be committing polygamy. The two are going to need to wait until Gwen’s divorce from Gavin is final. However, they might have hosted an event that could have been misread as a wedding.

A nice little get-together between friends in relaxed style in Oklahoma does sound like fun. Maybe Blake and Gwen invited some of their good friends to his ranch for a little party and that’s what OK! thought was a wedding.

Another “source” quoted by OK! revealed that the wedding ceremony cost just $30k. Knowing Gwen Stefan’s elegant taste, no way would that happen. And as for hard-partying Blake Shelton, that paltry amount wouldn’t even cover the bar tab!

We also wonder if these two are coupling in all sincerity or if it’s contrived. Is this a showbiz romance or something else? Since both their exes reportedly cheated on them, who could blame Blake and Gwen for wanting their own sort of celeb revenge, especially when hurt hearts are involved?

Since Blake and Gwen have both appeared as judges on the very popular NBC competition show The Voice (and Blake appears to be the most popular of all the judges), could the romance between these two singing stars be just for show?

Is it something the producers of The Voice thought up to keep the show in the spotlight so it would remain in people’s minds between seasons? Or it could be a matter of perfect timing – both were hurt by their spouses and they commiserated backstage at The Voice and perhaps things got serious from there.

This leaves us with the question then – are Gwen Stefani and Blake Shelton really in love? And, if so, will they take the plunge and get married? If so, when?

To follow everything celebrity, keep it right here at CDL for all the latest celebrity news and gossip.