Gwen Stefani Explodes On Miranda Lambert For Making Amends With Blake Shelton: Stay Away From My Man! (PHOTO) 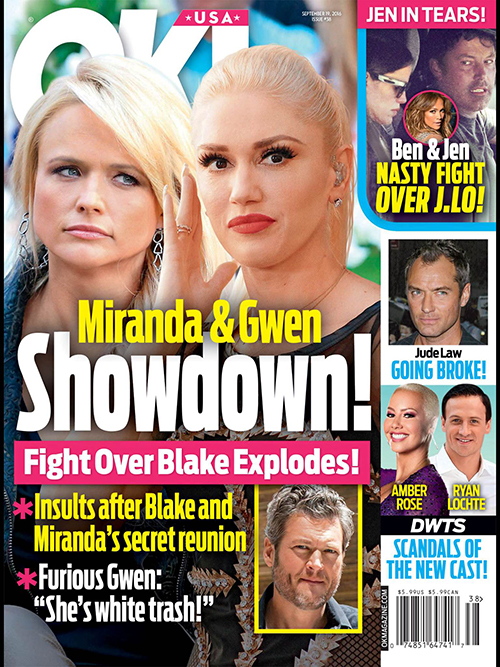 Gwen Stefani and Blake Shelton’s picture perfect relationship seems to have hit a major speed bump: his ex-wife Miranda Lambert. It’s no secret that Miranda Lambert and Gwen Stefani haven’t been the best of friends since Blake started hooking up with his former “The Voice” co-star. Gwen reportedly flipped her lid when she learned that Blake and Miranda had buried the hatchet and were spotted canoodling backstage of an event recently.

This week’s edition of OK! Magazine features a photo of Gwen Stefani and Miranda Lambert. The headline screams, “Miranda And Gwen Showdown: Fight Over Blake Explodes!” The front page of the tabloid goes on to tease that Blake and Gwen had a major blow-up after she learned of his “Secret Reunion” with his ex Miranda.

Apparently, Blake and Miranda had a run-in backstage of the ACM Honors last week. Bystanders were surprised to see that Blake and Miranda were catching up like old pals, and there was no bad blood between them. Of course, the country music world was thrilled by the two singers making amends and creating a much less awkward workplace for everyone. However, Gwen Stefani was reportedly livid when she heard about Blake’s public chat with his former wife.

An insider dished to OK! Magazine, “Blake thought she’d [Gwen] be happy they’d gotten the chance to call some things water under the bridge,” continues the supposed source. “Instead, though, it sent her into a panic.” But, Gwen wasn’t happy. Instead, sources say that she texted Miranda and threatened her to “stay away from her man.” Naturally, Gwen’s accusations didn’t go over well with Miranda, and it wasn’t long before the two grown women were hurling insults back and forth to each other.

The tabloid’s source added, “Gwen went on a rampage, and Miranda didn’t hold back either… God help them all if they come face to face anytime soon.”

Yikes, that sounds messy. However, it’s hard to believe that the two adult women were really behaving like petty high-school girls and cursing each other out via text message. But, stranger things have definitely happened in Hollywood. Are you Team Gwen or Team Miranda? Share your thoughts in the comments below!