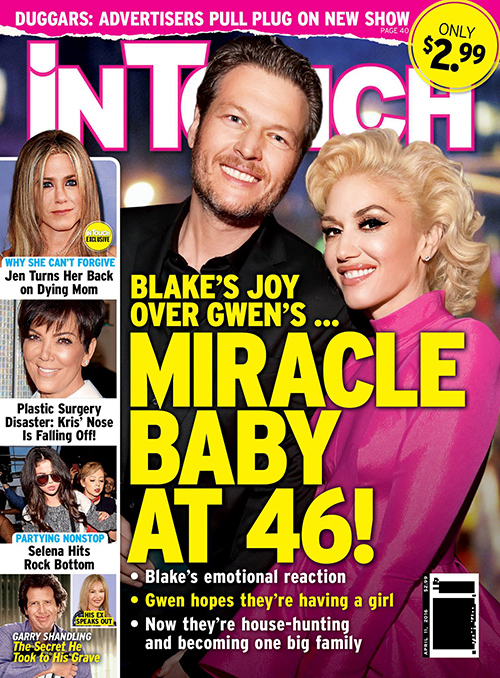 Is Gwen Stefani pregnant with Blake Shelton’s baby? The Voice coaches have been moving full steam ahead with their relationship – and have been dating for several months now. Reports suggest that they might even be talking about a wedding, as soon as Gwen’s divorce from Gavin Rossdale is official. But are they having a baby too?

This week’s cover of In Touch Magazine features a photo of Gwen Stefani and Blake Shelton. The headline reads, “Blake’s Joy Over Gwen’s Miracle Baby At 46.” The cover of the tabloid goes to tease that Gwen is hoping for a girl, and they are house-hunting already and preparing to become “one big happy family.”

It seems like ever since Blake and Gwen confirmed that they are dating, the tabloids have been trying to pin a baby on them. This is not the first magazine that has claimed Gwen is pregnant with Blake’s baby, and it most likely won’t be the last. But, so far, there is no reason to believe that that the singer is having baby number four.

Gwen Stefani has three children, it is safe to assume that she knows how babies are made and what precautions to take to ensure that she doesn’t make any more. Between Gwen’s divorce, her new album, and her and Blake’s gigs on The Voice, plus her three boys, it’s hard to believe that the singer would consider getting pregnant with a fourth child right now.

Of course, there is the off chance that Blake and Gwen are expecting a baby and they planned a pregnancy – stranger things have happened. Stefani is 46 years old, and if she is planning on having any more babies, her biological clock is ticking and she should do so sooner rather than later.

What do you guys think? Do you believe that Gwen Stefani is pregnant? Is Blake Shelton going to be a dad? How will Miranda Lambert react if that is the case? Share your thoughts and theories in the comments below!