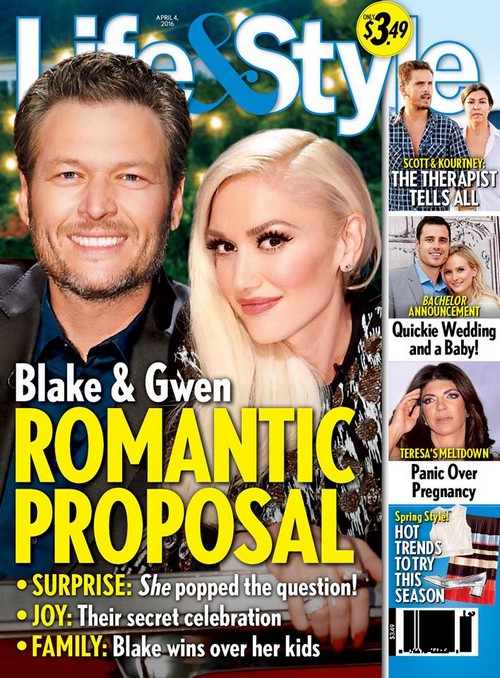 Gwen Stefani and Blake Shelton are getting married – according to this week’s cover of Life & Style Magazine. The Voice coaches have been packing on the PDA on the NBC singing show, and bragging about their new romance to any one who will listen.

Blake is even playing step-daddy to Gwen’s kids with her ex Gavin Rossdale. So, it seems fitting that the next step in their relationship would be an over-the-top wedding.

This week’s edition of Life & Style Magazine features a photo of the happy couple on the cover and the headline reads, “Blake And Gwen’s Romantic Proposal.” The L&S cover goes on to tease that Gwen is actually the one that popped the question and asked Blake to marry her! Blake was obviously surprised by the proposal, but he said “yes!”

According to the tabloid’s insiders, it was a very romantic and traditional proposal – aside from the fact that Gwen did the asking instead of Blake, Gwen doesn’t want to wait and let Miranda Lambert back into the picture. The source dished, “She surprised her boyfriend with a lavish private dinner and a marriage proposal. The pop star asked her beau of less than a year to marry her.”

Of course, Gwen Stefani is still technically married to Gavin Rossdale and in the midst of a long and messy divorce from the rocker and father of her children. So, The Voice couple hasn’t exactly dove in to any wedding plans just yet.

Life & Style goes on to say that Gwen and Blake are trying to keep their engagement a secret until after her divorce is official and she is legally allowed to get married again.

Gwen and Blake’s romance has been in the press for months and doesn’t seem to be going away any time soon. Of course their PDA sessions on The Voice are definitely keeping people buzzing. Do you believe that Gwen and Blake are secretly engaged?

Does Blake Shelton really seem like the kind of guy that would let a woman propose to him instead of vice versa? Come to CDL for all The Voice news, recaps and gossip!