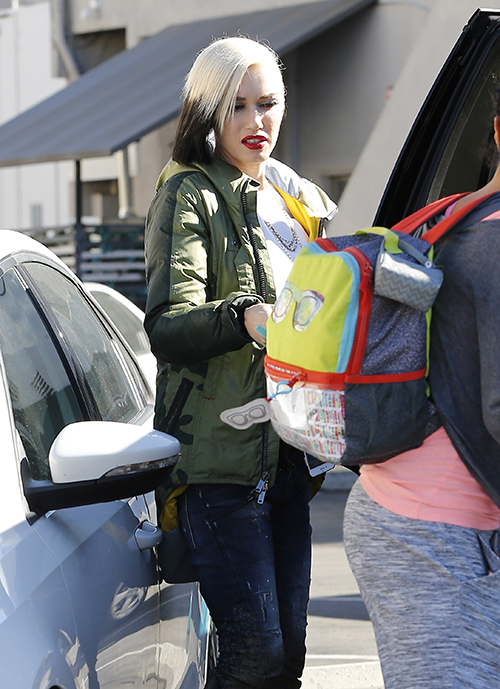 Gwen Stefani is reportedly pregnant with Blake Shelton’s baby. In Touch reports that being the reason for Gwen and Blake’s recent trip to the country star’s Oklahoma ranch. Gwen is even reportedly craving Dairy Queen ice cream, their reason given for Gwen’s recent Twitter pic of a DQ dipped cone.

Stefani and Shelton have been spending tons of time together during the holiday season and seem to be more in love than ever. What looked like a romantic getaway to Blake’s Oklahoma ranch was reported as being a celebration of pregnancy news according to In Touch. Their source claims, “Gwen is pregnant. She and Blake are overjoyed.”

Blake really wants kids, which is part of the reason for his split from Miranda Lambert according to Page Six. Gwen Stefani already has three boys of her own and while Blake seems to be getting along with Gwen’s family, it’s not the same as having a child of your own. Is Gwen getting ready to give Blake the child he’s wanted so badly?

Apparently, Gwen’s pregnancy news also comes along with a side order of Gavin Rossdale baggage. Gwen is still trying to workout divorce details with her estranged husband and things are reportedly getting rather heated. The In Touch source claims, “The only thing making things better is being with Blake — and knowing they’re starting a family together.” How is Gavin going to react if Gwen really is pregnant with Blake’s baby?

In Touch said that Gwen Stefani’s recent Dairy Queen trip, as documented on Twitter, was one of her pregnancy cravings. That might explain why Gwen was taking Blake to some of her favorite hometown eateries in Anaheim, California recently too. Shelton and Stefani were seen in a few different spots that Gwen frequents lately and were even said to be ordering pizza. Gwen does seem to be letting loose on her notoriously strict diet.

So far, neither Blake Shelton nor Gwen Stefani’s reps are commenting on the pregnancy news. Blake and Gwen have certainly been spending a lot of time together and sometimes unplanned pregnancies happen. Is it possible that Gwen really might be carrying Blake Shelton’s baby?