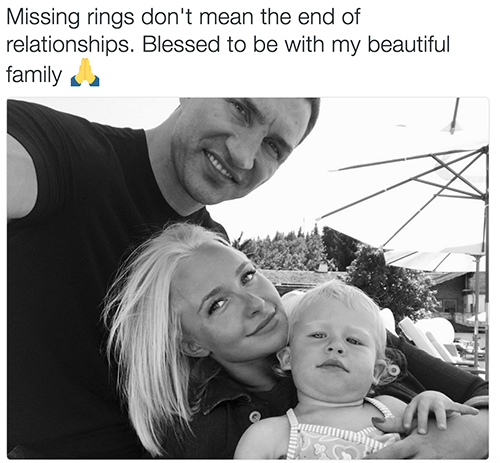 Hayden Panettiere took to social media and denied that her relationship with fiancé Vladimir Klitschko is over. Just because Hayden and Wladimir haven’t split – yet – doesn’t mean Hayden hasn’t called off the wedding, however.

A black and white photo of Hayden, Wladimir, and their daughter, Kaya, is captioned, “Missing rings don’t mean the end of relationships. Blessed to be with my beautiful family.” What does it mean when your big sparkly diamond engagement ring is missing? Did Hayden lose it while in rehab?

The ‘Nashville’ star recently left rehab in Utah after being treated for post-partum depression and was photographed in New York City on the Fourth of July without her engagement ring. Hayden was dressed casually, smoking a cigarette, and reading ‘Underboss: Sammy the Bull Gravano’s Story of Live in the Mafia.’

If Wladimir and Hayden eventually do call it quits, it wouldn’t be the first time. The couple met in 2009 at a book launch party and stayed together for about 2 years. In 2011, the ‘Nashville’ star and the former world heavyweight champion ended their long distance relationship.

This couple couldn’t stay away from each other. By April 2013 Hayden and Wladimir were dating again. It didn’t take long for Wladimir to pop the question. Hayden said yes and started sporting a beautiful diamond ring on her left hand ring finger in October 2013.

The couple welcomed their daughter, Kaya, in December 2014. As you can see, Hayden Panettiere and Wladimir Klitschko have a long and complicated romantic history. Hayden has been bravely and brutally honest about her battle with post-partum depression and sought treatment in October 2015.

This first trip to rehab put Hayden’s acting career on hold. Script writers for ‘Nashville’ had to devise a storyline where Hayden’s character Juliette Barnes plane disappeared to account for Hayden’s time off.

In May 2016, Hayden once again sought help for post-partum depression. Did this second trip to rehab put wedding plans on hold? It’s been nearly 3 years since Wladimir asked Hayden to marry him and, yet, still no wedding. A baby – but no wedding.

Is Hayden Panettiere putting her wedding to Wladimir Klitschko in order to refocus on her career? ‘Nashville’ was abruptly cancelled by ABC but quickly picked up by CMT after a social media campaign by fans of the show. Previous reports indicate that Hayden will return as Juliette Barnes.

Is her career more important right now than marriage? Has Wladimir taken a step back to think things through? Will there be a wedding for Hayden and Wladimir in the future?