Hilary Duff Struggles To Slim Down Despite Brutal Exercise And Diet Regimen? 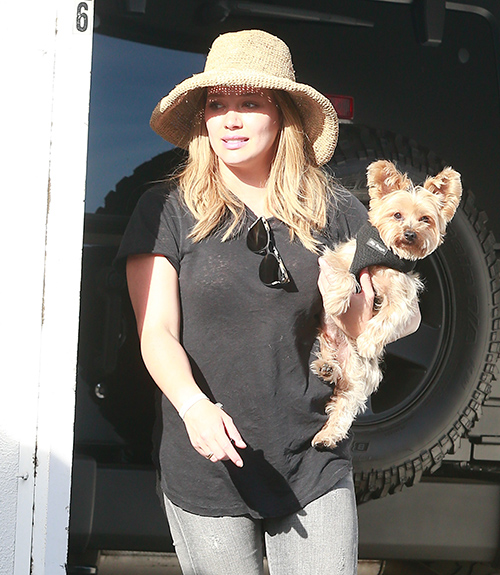 Hilary Duff was spotted leaving her gym in Los Angeles this past weekend. The singer and actress has been working out nonstop, mostly because she is now dating her personal trainer, Jason Walsh. But is her hard work paying off?

Hilary Duff’s body confidence issues have been ongoing throughout the years. Even though the singer and actress is always spotted by the paparazzi going both in and out of local gyms in Hollywood, both fans and critics have noticed how much her curves have changed throughout her career. And now observers can’t help but notice that Hilary might be struggling to slim down despite her obviously brutal exercise and diet regime.

Back in 2014, Hilary even admitted that she was obsessed with everything she ate during her teenage years, when she weighed just 98 pounds. She told Health Magazine at the time, “I was totally obsessed with everything I put in my mouth. I was way too skinny. Not cute. And my body wasn’t that healthy—my hands would cramp up a lot because I wasn’t getting the nutrition I needed. That constant pressure of wanting something different than I had? I regret that.”

Surely, no matter how much Hilary Duff says that she’s not worried about what others think about her in the ‘skinny-obsessed’ entertainment industry, she’s still using every free moment she has to hit the gym. After all, Hilary knows that her career isn’t what it used to be and the only way she can keep up with her Hollywood competition is if she does what everyone else is doing – and that’s slim down to industry standards.

Yet, for Hilary, her weight loss journey so far seems to be more work than she initially anticipated. In fact, no other celebrity is constantly caught by the paparazzi leaving the gym as much as Hilary does. Could dating her personal trainer be doing Hilary Duff more harm than good?

Take a look at our photo gallery of Hilary Duff below and tell us, do you think the actress is going through a brutal exercise and diet regimen? Is Hilary concerned about her appearance? Let us know what you think by dropping us a line below. Also, don’t forget to check back with CDL for all the latest news and updates on Hilary Duff and all of your favorite celebrities right here.