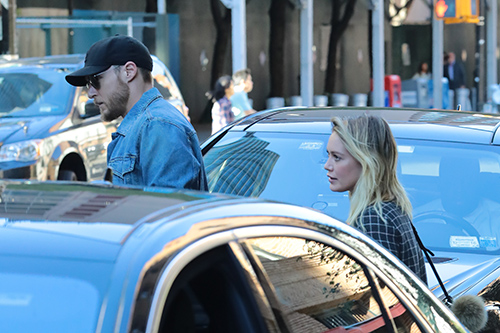 Hilary Duff was recently spotted out and about with her personal trainer and boyfriend, Jason Walsh. The actress and singer made it pretty clear that she has definitely moved on from her on-again, off-again ex-husband Mike Comrie with a new hot man by her side.

Hilary Duff’s relationship with Mike Comrie hasn’t been an easy one. Even though the ex-couple officially split two years ago and their divorce wasn’t finalized until February of this year, she was spotted getting up close and personal with him on more than just one occasion. Sure, the exes are still friends and co-parents because of their 4-year-old son, Luca, but it appeared as though Hilary just had a hard time letting go of her first husband for the longest time.

It might have been because she got married at such an early age or that she was still harboring some strong feelings for her first husband. Whatever the case, it looks like Hilary has finally managed to put the past behind her, as she’s making her new relationship with Jason Walsh official. That is, at least for the cameras.

Many fans aren’t surprised that Hilary is dating someone like her personal trainer during what many believe might be a difficult time for the blonde beauty. If there’s one person who knows that Hilary is going through right now, it’s most definitely her boyfriend, Jason Walsh. Even though the couple is yet to open up publicly about their relationship, there’s no doubt that they have an intimate bond. The only question though is whether or not Jason will be able to withstand all the pressure that comes with dating a celebrity like Hilary, and especially in the celebrity spotlight.

Take a look at our photo gallery of Hilary Duff and Jason Walsh below and tell us, does it look like the actress finally moved on from Mike Comrie? Is Jason helping Hilary lose weight and gain her confidence back? Let us know what you think by dropping us a line in our comments section. And of course, check back with CDL for all the latest updates on Hilary Duff and all of your favorite celebrities right here.