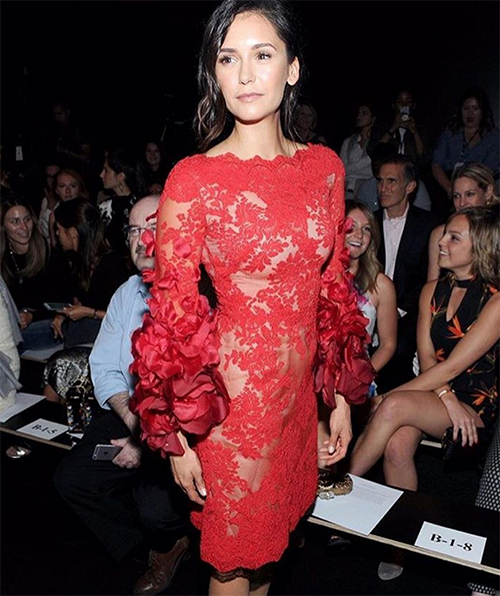 Nina Dobrev’s return to ‘The Vampire Diaries’ is probably being blocked by none other than her ex, Ian Somerhalder. There’s new speculation that the actress wants nothing to do with his ex, especially after he threw shade at her for their on-screen love scenes while she was still on the show.

Nina Dobrev and Ian Somerhalder’s break up has always spurred plenty of emotions for ‘The Vampire Diaries’ fans, especially now that the series depends on the actress to come back for their final season of the show. Nina has yet to confirm whether or not she’s reprising her role as Elena Gilbert after quitting the show back during season 8. And one of the reasons why she might not be coming back is because of the shade Ian threw at her by claiming that their on-screen love scenes during ‘The Vampire Diaries’ were nothing more than cute.

During an interview with Entertainment Weekly, Ian hinted that it was difficult to separate his personal feelings for Nina with his professional ones, especially when they were expected to shoot love scenes together. Explaining how hard it is for him to get into character and make out in front of a camera, Ian said, “It is cute to see them and their interactions together.

I think anyone — whether it be Nina or Paul or myself — anyone will tell you it’s typically going to be a lot more fun to play the bad guy, the bad boy, the bad girl because they’re more dynamic, they’re more fun. But it is cute to see Damon and Elena and their interaction. Damon is just smitten, he’s in love and it’s cute, you know?”

Surely, no one wants to hear their boyfriend tell the world that their love scenes – whether it’s on or off screen – is ‘cute.’ Sexy, sultry, hot: all would have been better words. Ian calling his love scenes with Nina ‘cute’ just means he couldn’t care less about her feelings while also hinting that the chemistry between them was dead.

It’s no wonder that Nina Dobrev doesn’t want to return to ‘The Vampire Diaries.’ The 27-year-old actress doesn’t need her ex-boyfriend belittling her efforts or her acting for that matter too, especially since ‘The Vampire Diaries’ success depends on her so much right now.

What do you think, CDL readers? Is Nina Dobrev not returning to ‘The Vampire Diaries’ because of her Ian Somerhalder drama along with the shade he threw at her? Drop us a line with your thoughts in our comments section below.

ATTENTION!! IF YOU DON’T HAVE TIME TO READ THIS JUST CLICK THE LINK IN MY BIO PLEASE!!! Hey everyone please participate and do this with us!!! There are over 50 thousand people displaced across the state of Louisiana and there are also countless schools that have been damaged AND pets in need of supplies and shelter!! Over the last week we’ve been working with a wonderful team over at CrowdRise to set up these pages as well as the First Lady of Louisiana Donna Edwards in an effort to bring assistance to the Louisiana School Boards Association (LSBA) to assist flood-damaged schools throughout South Louisiana. The LSBA will help schools provide classroom supplies, school uniforms, technology equipment, structural repairs, clean-up costs and other needed aid. These schools and fur babies of Louisiana need our help!! WE ARE ALSO raising funds for the Louisiana State Animal Response team (a division of Dr. Walter J. Ernst, Jr. Veterinary Memorial Foundation (WJE). They are doing an amazing job coordinating animal rescues in Louisiana by monitoring floodwaters and distributing teams to assist with rescue efforts!! Supplies are important, safety and vet care and shelter is important, food is important and restoring a sense of normalcy is so so important! Please join us!!! THANK YOU!!!!!!! (Also by donating you are entering a chance to win a video chat with us!!!!!!!!!!)

Happy EarthDay everyone from us.We’re in the middle of the North Atlantic Ocean in this yellow submarine shooting Season 2 of @yearsofliving on the @natgeo Channel with an amazing group of scientists, film makers, and the incredible tech professionals as well as crew of the Alucia. Thank you Mr. Ray Dalio for this extraordinary vessel to live on while we search for the Earth’s past that will be the key to our future. This has always been my boyhood dream to be on a National Graphic science expedition-thank you for all that made this happen! Let’s do something Great for our planet today so we get in the habit of doing it everyday. We must protect our wild habitats, keep our waters clean, educate our youth and stop stop dirty corporations that own dirty governments so all of us and our kids have a home. It’s our earth, our home- let’s make Earth Day EVERYDAY… Love, Ian and Nikki