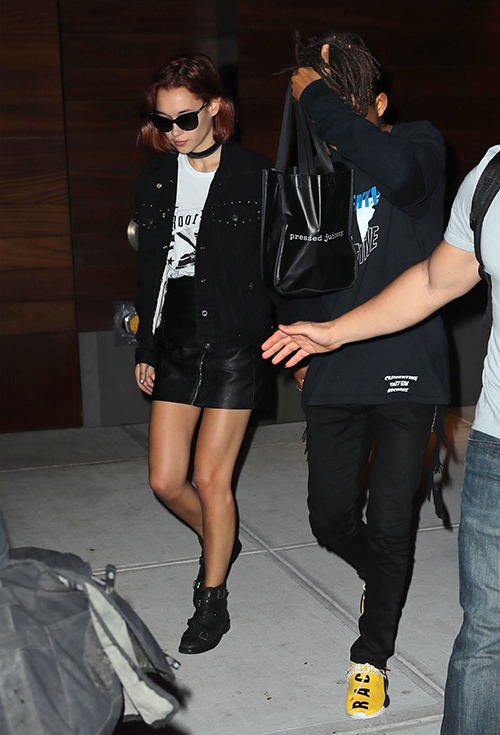 Jaden Smith and Sarah Snyder were spotted leaving Gigi Hadid’s house after a night of celebrating the model’s success at this year’s New York Fashion Week. The low-key couple hid their faces from the cameras as they tried to make their way through the swarm of paparazzi.

Will Smith and Jada Pinkett Smith‘s son is no longer the aspiring, up and coming actor his parents hoped him to be several years ago. In fact, it almost seems as though both Jaden Smith and Willow Smith have faded into Hollywood obscurity, despite their famous parents and name recognition. It’s no wonder that Jaden Smith has become the victim of a Internet death hoax, as clearly no one in the entertainment industry is taking him seriously anymore. And while Jaden Smith is no longer trying his hand at acting, he is pursuing a career in modeling, much to the dismay of his A-list parents.

Just like fellow models Kendall Jenner and Gigi Hadid, Jaden Smith is using his parents’ connections to land high-profiled contracts and couture campaigns that other models could only dream of having one day. There’s no doubt that Jaden Smith’s girlfriend, Sarah Snyder, would love to land the same high-profiled Louis Vuitton womenswear campaign he has started in.

Clearly, the modeling world is being ruled by the children of the rich and famous. And because film producers are no longer calling Jaden Smith or offering him roles in big budget films, he’s following the footsteps of the Gigi Hadid and Kendall Jenner, who have both used their family’s reality television connections to make them the household names they are today.

Surely, Will Smith and Jada Pinkett Smith had higher hopes than to see their son mingle with reality stars and Instagram models but it doesn’t look like Jayden Smith has any hope of one day making his parents’ dreams come true.

Take a look at our photo gallery below of Jaden Smith and Sarah Snyder and tell us, do you think Will Smith and Jada Pinkett Smith are disappointed in their son? Has Jaden Smith ruined his chances of becoming a Hollywood movie star like his father Will Smith to pursue a career in modeling instead? Let us know by dropping us a line below in our comments section.