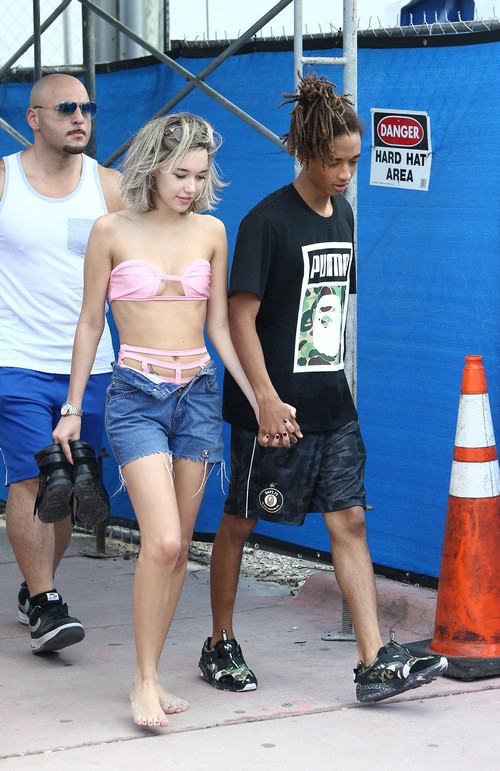 Kylie Jenner is not fond of Jaden Smith’s girlfriend, Sarah Snyder, and thinks she is trash according to sources close to the situation. It is very clear the KUWTK star wants to break up the young couple thanks to bad blood and jealousy. Kylie is said to be “just friends” with Will Smith’s son, Jaden, but Kylie hates Jaden’s relationship with Sarah especially now that she is single again.

Kylie and Jaden are purported to be “just friends,” but reports over the past few years claim otherwise. Basically, Jenner and Smith had a relationship in their younger teen years and Jaden was Kylie’s first love.

Kylie was then transformed into lip filler injected plastic surgery enhanced Kardashian money-making machine and started dating Tyga. Despite moving on to dating the older rapper, Kylie is said to be insanely jealous of all of Jaden Smith’s girlfriends.

The ‘Keeping Up With the Kardashians’ star reportedly went into a jealous rage during fashion week when she caught Jaden and Sarah Snyder making out as she worked the runway.

Perhaps Kyle Jenner is onto something when it comes to hating Sarah. CDL exclusively reported Snyder’s alleged drug habits and arrests.

A source revealed to CDL, “In addition to her most recent and well published arrest she received after stealing a $16,000 Birkin bag from an acquaintance, she has multiple arrests and is in the Charlotte Mecklenburg county jail system. Her charges she received back home include a felony conspiracy, larceny and breaking and entering charge. Her habit of stealing was motivated by her obsession with the drug Xanax, when it came to getting drugs and pills, nothing stopped her from getting them, she was fine with f**king a drug dealer if that meant she could get her bars (the name for the 2 milligram Xanax pill).

There is a reason that nobody from back home would support her success, which mainly came from lying on her back. Jaden might want to listen to the warnings he has received about her, on the outside she is a beautiful girl, but beneath that she is a friend who exploits those around her to get what she wants.”

Jaden refuses to see Sarah’s alleged true colors, and Kyle is still raging with jealousy. Jenner and Smith were both in Miami for Art Basel, and apparently the high school drama is running amok.

E! is trying to put out fires and ran a story asserting Kylie and Jaden are just friends and went as far as to find a source who claimed, “Kylie knows Jaden is very into Sarah and respects it and likes her as well. Jaden and Kylie are still really good friends and that is it. They will always care for each other but at this point in their lives, they just want each other to be happy.”

It’s hard to believe that E! would provide any negative news on Kylie Jenner and Jaden Smith’s tortured relationship, as Kylie is part of the ‘Keeping Up With the Kardashian’ machine that runs on E!

What do you think? Does Kylie Jenner hate Jaden Smith’s girlfriend, Sarah Snyder? Does the KUWTK star want to break up the young couple? Let us know your thoughts in the comment section below and don’t forget to keep checking CDL for all the Kardashian drama and news.

Jaden Smith and his girlfriend Sarah Snyder out and about in Miami, Florida on December 06, 2015 by FameFlynet