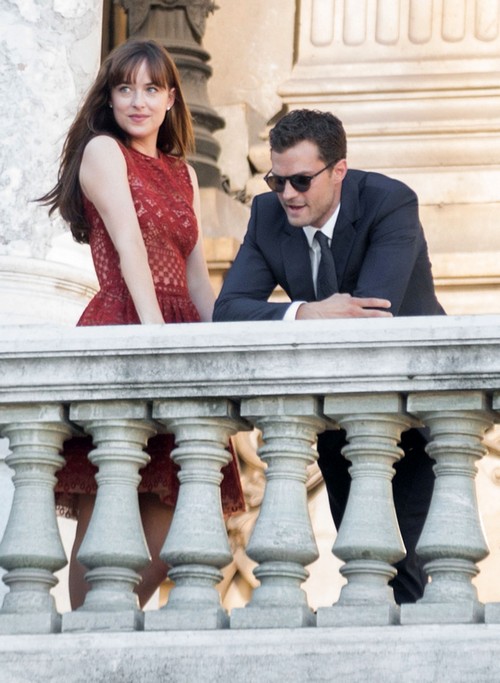 Jamie Dornan and Dakota Johnson were spotted filming for their upcoming ‘Fifty Shades Darker’ at a medieval castle in Roquebrune-Cap-Martin, a town near Nice, just days after a deadly Bastille Day attack brought Nice, a city in Southern France, to a screeching halt.

The devastating Bastille Day terrorist attack killed 84 people that included 10 children. Mohamed Lahouaiej Bouhlel, 31, drove his white lorry in the busy Promenade des Anglais, crushing victims to death. As if that wasn’t enough, soon he exited the vehicle and sprayed bullets on the frantic crowd. Within minutes, the shocking footage was online for the world to see.

The ‘Fifty Shades Darker’ cast and crew was stationed in Nice at the time of the incident. Dana Brunetti, film’s producer, posted on Facebook late Thursday that every single one of the cast and crew members were safe and unharmed in the terror attack.

“Production has confirmed that everyone working on location in the south of France is okay. Everyone has been accounted for and it safe and sound,” Brunetti wrote.

As the terror attack in Nice was flashed across news channels, the fans as well as friends and family of the crew grew worried about their safety. However, Dana Brunetti wasted no time in assuring those concerned that every one from the film unit is safe. In fact, the team looks like it is all set to resume work, putting the deadly incident to the backburner.

Inside sources claim that the production unit had been filming outside Nice and it was only a day before that the unit finished shooting at the fateful location where the attack killed hundreds. But the team is safe and already working on the remaining portions of the film.

Celebrities spotted on the set of ‘Fifty Shades Darker’ filming in Paris, France on July 18, 2016