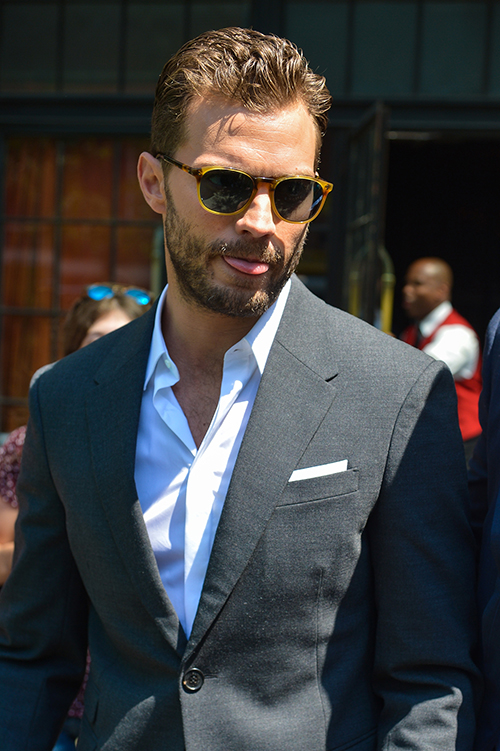 It looks like Jamie Dornan has finally found a role to help shed his ‘Fifty Shades of Grey’ Christian Grey stigma. There is a new report that indicates the Irish-born actor is in talks to join the case of the new blockbuster film, ‘Robin Hood: Origins.’

Jamie Dornan has made it pretty clear that he’s desperate to shed his ‘Fifty Shades of Grey’ image, despite the fact that the franchise has helped make him a household name and international star. In fact, Jamie has even hinted several times in interviews that he only accepted the Christian Grey role so it can help open other doors in Hollywood for him. And it looks like his plan has worked, although it’s doubtful that his fan base will fully forgive him.

According to the Hollywood Reporter, Jamie is in the final negotiations to play Will Scarlett, who many remembers as a member of the Merry Men band. The film will also star Taron Egerton as Robin Hood, Jamie Foxx as Little John, and Eve Hewson as Maid Marian.

Transitioning from sex-addict Christian Grey in ‘Fifty Shades Darker’ to a member of the Merry Men in ‘Robin Hood’ is quite the jump for the actor, but it’s one that he’s desperate to make. Many critics have pointed out that Christian Grey has often acted like he’s embarrassed of his participation in the ‘Fifty Shades of Grey’ films and that he wants his contract to end so he can cash his checks and finally move on from the critically-panned and ridiculed franchise.

Sure, Jamie Dornan will have no problem using his handsome good looks and persona to land more blockbuster movie roles, but if he continues to dismiss what ‘Fifty Shades’ has done for his career, his fans will no doubt fire back . As much as Jamie would want the public to one day forget about his ‘Fifty Shades of Grey’ origins, the film’s massive fan base will always be there to remind him of his beginnings. Sure, Jamie could have taken other routes to help build his career, but he took the easy one by picking up a role that no one else in Hollywood wanted.