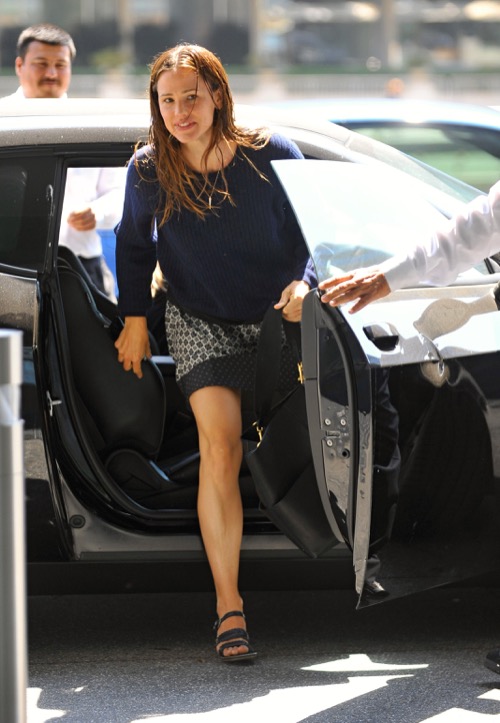 It’s rumored that Jennifer Garner isn’t speaking to her estranged husband, Ben Affleck after his odd appearance on Any Given Wednesday with Bill Simmons last week. The latest edition of Star is claiming that Jennifer is mortified and totally embarrassed by Ben’s behavior.

The two camps to this argument either side with Ben that he was simply being passionate in expressing himself, while others, like Star Magazine, claim to have proof he was a complete mess during his interview. Since Jennifer isn’t talking, you can guess where she stands on the matter.

Ben Affleck ranted and cursed a reportedly 20-plus times during the interview. He dredged up his past relationship with Jennifer Lopez, blaming Jen was responsible for his career taking a hard nosedive.

While he blamed the first Jen for ruining his career, he exalted his current wife, Jennifer Garner for being his rock and supporter during his come-back years when he won another Academy Award in 2012.

A source told star that Ben Affleck arrived for the HBO show interview slurring his words and looking bloated. They continued: “Ben humiliated himself by being clearly drunk on TV. It won’t be easy for him to live that down.” The insider said the shoot quickly turned disastrous.

Everything headed downhill rather fast, leading to Ben Affleck’s rant about Deflategate.

The insider goes on to say that Jennifer Garner isn’t speaking to Ben. She has supposedly seen him drunk many times before, just never on National television. What is more humiliating to Jennifer garner? Seeing her husband drunk?

Or seeing her husband drunk on National television before millions of viewers? Does she not care about his drinking? Or is it she doesn’t care as long as he keeps it under wraps?

Finally, the insider states that Ben Affleck will need to start fresh with Jennifer if he wants his family back. Especially if he doesn’t want a divorce. Ending their marriage would force him to pay child support and part with his money, which Ben clearly doesn’t want to do.

The Internet has also been abuzz with stories that Ben Affleck will play pretend husband and family with Jennifer and their kids to keep his money. Then again, the actor says he truly cares for his wife, but would a caring husband go on national television drunk and act the fool?

Wouldn’t a good husband consider the consequences of his actions if he doesn’t want to lose his fortune?

If Jennifer is so disgusted and angry with Ben, might we soon see headlines announcing their divorce? Yes, that’s been bandied about too. If Jennifer is done with Ben, and she’s gotten to that point where she’s had enough, don’t you think a final separation is on the horizon?

Will this be the final straw for Jennifer Garner? Will she finally leave Ben Affleck? Let us know your thoughts in the comments. Keep your browser right here at CDL for all the latest celebrity gossip and news.

Jennifer Garner was spotted at a business meeting in Los Angeles, California on June 29, 2016. She wore a blue sweater with a black skirt. FameFlynet