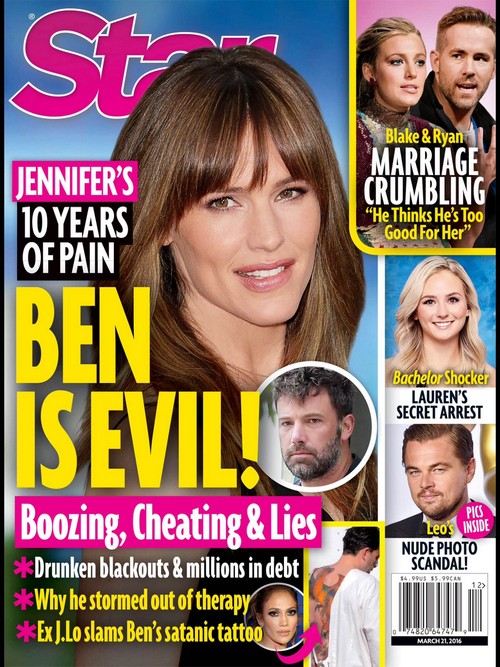 Jennifer Garner revealed in a recent interview that the separation from Ben Affleck happened long before the allegations of an affair with Christine Ouzounian began. What did break the couple up after a decade of marriage? Was Ben a cold and selfish husband who put partying and gambling ahead of family?

As previously reported, Jennifer called Ben the love of her life and described him as generous and charismatic. In the interview Jennifer Garner did hint that Ben Affleck could be unfeeling and cold by saying, “When his sun shines on you, you feel it. But when the sun is shining elsewhere it’s cold. He can cast quite a shadow.”

An insider came forward and spoke with Star magazine, divulging that Jennifer did everything she could to keep the marriage together. However, Ben was about as selfish as one man can get. Ben would rather be on location shooting a movie than at home with Jennifer and the children.

The source pointed out that in 2009 Ben made four movies. This was the year the couple’s daughter Seraphina was born. Which means Ben was away for most of the first year of his daughter’s life.

As if being a workaholic weren’t bad enough, Ben allegedly would rather go out drinking and gambling with his friends. Many have heard that Ben has gotten to the point where he was so drunk he blacked out. And a source says Ben is millions of dollars in debt because of his gambling addiction.

Jennifer Garner tried everything she could to make a wonderful home life for Ben Affleck and their children the insider revealed. That wasn’t enough for Ben who would just come and go as he pleased.

When Jennifer would beg Ben to spend more time at home with the family Ben wild just get moody and silent. The source divulged, “He could be so disrespectful to her sometimes, it bordered on cruel.”

Despite reports that Ben Affleck and Jennifer Garner spent the holidays together with their three children and even had a date night at the couple’s favorite restaurant, the insider says Jennifer is moving on with her life.

The actress’s main focus in life is the couple’s three children, Violet, Seraphina and Samuel. Jennifer has also begun to take her acting career more seriously.

Ben Affleck may be in self-destruct mode but Jennifer Garner is bouncing back from the painful end of the marriage. Jennifer may have had a rough 2015 but going forward she’ll be fine whether or not Ben gets his act together or he crashes and burns.