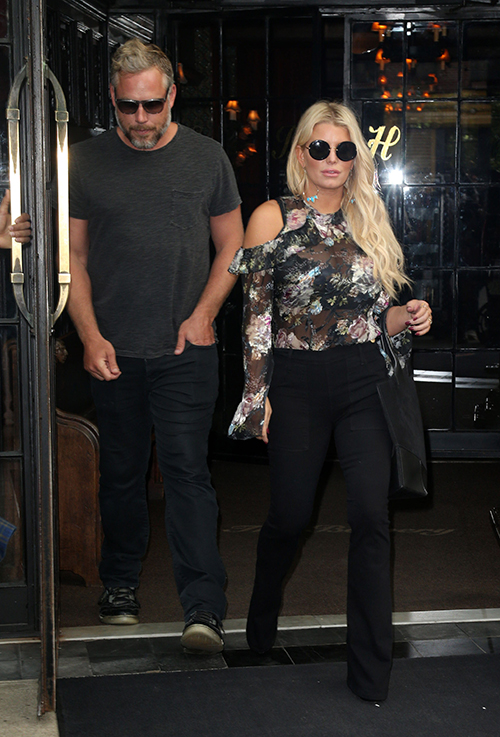 There’s a good chance that Jessica Simpson and Eric Johnson might be the next celebrity couple to call it quits and split. There’s new speculation that the romance in Jessica and Eric’s marriage is dead, as the couple has been fighting non-stop for several months now.

Jessica Simpson and Eric Johnson’s relationship has always been based on their lust for one another. The former singer has always made it a point to tell the public how attracted she is to her husband while also hinting at their wild and adventurous sex life. After all, Jessica loves to portray herself as a young, sexy wife and mother-of-two who spends more time in between her sheets than anywhere else. But has the spark already died, despite only being married for two short years?

According to Star Magazine, both Jessica Simpson and Eric Johnson were spotted looking distant and tense while arriving at LaGuardia Airport in New York City. Unfortunately, this isn’t the first time the couple has been seen looking unhappy together. Not only are Jessica and Eric dealing with the everyday stress that comes with raising two small children together, but also the fact that the former NFL star hasn’t had a stable job for years. Needless to say, Jessica is probably feeling increasingly frustrated seeing her unemployed husband sit at home and do nothing while they live off of her fortune.

One source close to the couple dished, “Jessica honestly doesn’t know what Eric does all day. She’s grown resentful and she’s not even bothering to hide it anymore.”

It’s no wonder that the couple isn’t attached at the hip anymore. It wouldn’t surprise anyone if Jessica is pressuring Eric to find a job rather than sit home and live off of her millions. With all the fighting that’s going on behind closed doors, their passion for each other has certainly fizzled out.

The last thing Jessica wants to do is seduce a man who does nothing more than sit on the couch all day. The former tight end has done nothing since the New Orleans Saints released him back in 2008. Considering that Eric doesn’t have much to offer as far as work is concerned, his job options are definitely numbered.

Then again, the only two people that really know what’s going on in their marriage are of course Jessica and Eric. Tell us CDL readers, do you think Jessica Simpson and Eric Johnson are headed towards a divorce? Is Jessica growing frustrated over Eric’s unemployment status? Let us know your thoughts by dropping us a line below.