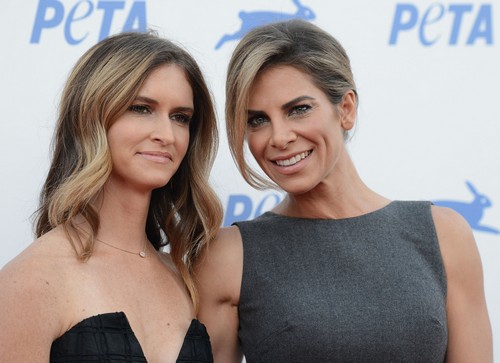 Jillian Michaels of ‘The Biggest Loser’ fame is engaged. But is the fitness guru refusing to set a wedding date until fiancée Heidi Rhoades signs a prenup? To find out how Jillian popped the question to longtime partner Heidi you will need to watch the new docuseries “Just Jillian” which premieres January 19 on E!.

National Enquirer has an exclusive first look at Heidi’s engagement ring. As you might expect, it’s a dazzling rock.

Insiders revealed to NE that Rhoades has been expecting a proposal for some time. Heidi’s been with Jillian for nearly seven years – through all the ups-and-downs as Michaels has become a superstar in fitness world and weight loss world.

It may not be an easy path to the altar Jillian and Heidi. If you’ve watched the previews for “Just Jillian” you’ve heard Michaels say, “I don’t know what scares me more – having another kid or getting married.” Is that because there are millions of dollars at stake in the event of a divorce?

The former ‘The Biggest Loser’ trainer is quite the entrepreneur. Exercise videos, exercise equipment, workout wear, meal plans – that’s just part of the multi-million dollar Jillian Michaels’s empire. There isn’t much known about Heidi except that she works as a professional yoga instructor and gave birth to a son, Phoenix, in May 2012.

Jillian Michaels and Heidi Rhoades also have an adopted daughter, five-year-old Lukensia, who was born in Haiti.

Not making any assumptions here, but it doesn’t take a genius to figure out that Heidi will most likely the stay-at-home parent. And as we’ve seen time and time again getting married without a prenup can prove to be nightmare of epic proportions. And even with a prenup things can get ugly. What is Jillian going to do?

“Just Jillian” will give viewers a look into the couple’s life as Michaels tries to balance career and family. Jillian calls the docuseries “sort of a big, gay ‘Modern Family.’ It’s a lot of fun.”

But will it be fun when it comes time to sit down and talk money before the wedding? If Jillian Michaels and Heidi Rhoades were to split how much money would Jillian have to shell out to Heidi? Spousal support? Child support?

A giant chunk of the millions of dollars Michaels has earned before and after marrying Rhoades? Will Jillian and Heidi even make it down the aisle?