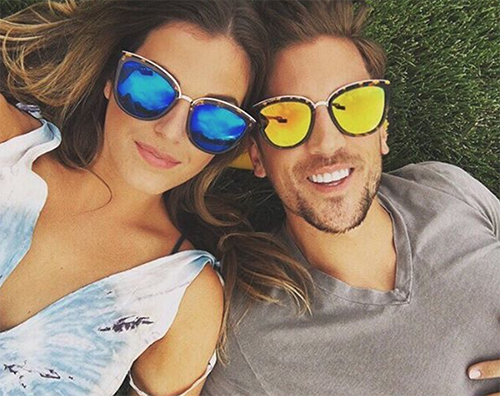 Remember when Nick Viall revealed that he slept with Andi Dorfman on The Bachelorette? Fans knew at that instant that her engagement to Josh Murray was doomed – however, the couple kept up the happy façade for a few more months. Eventually, they split, and Andi confirmed in her tell-all book that it was indeed her Fantasy Suite stunt with Nick that was the demise of their relationship. Well, Jordan Rodger’s cheating scandal and ex-girlfriend Brittany Farrar is the catalyst that will/has already ended Jojo’s engagement.

According to Bachelorette 201 spoilers, once Jojo and Jordan were settled into their new home together in Dallas, Texas and the media frenzy died down a bit, Fletcher began to do a little research. It wasn’t long before she figured out that Jordan Rodgers had completely played her while filming the reality TV show. Jordan insisted that he was not a cheater, and his ex-girlfriend Brittany Farrar’s allegations were just a result of her being bitter towards him. It didn’t take long for Jojo to see what we have all seen for months – Jordan was full of it.

Tabloid reports reveal that while Jordan is still living in Dallas, close to his estranged fiancée, Jojo actually kicked him out of their love nest. Apparently, the couple had a huge blow-up when Jojo learned that Farrar was telling the truth and her future husband is a bit of a player.

Of course, Jojo and Jordan are not ready to admit that their relationship was a complete disaster and they have canceled the wedding and split. But it is only a matter of time before the “happy couple” releases a public statement confirming their break-up. Do you think Jordan and Jojo Fletcher are over for good? Or could they still get married? Share your thoughts in the comments below and don’t forget to check CDL for all of your Bachelorette spoilers and news.

Morning hike with this one ❤️ Happy Birthday my love! Can’t wait to celebrate many many more with you @jrodgers11. #monkeyface #alreadysore