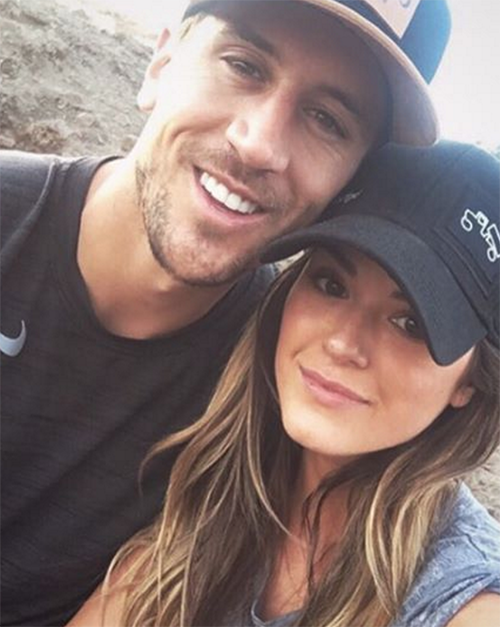 The Bachelorette Jojo Fletcher and Jordan Rodgers appeared on the live After The Final Rose show, following the Season 12 finale, and the couple bragged about how happy they were and insisted that they were getting married and would not break up. The couple revealed that as soon as they were done on the live show they were headed to Texas, and Jordan was moving in to Jojo’s house. According to a new report from Life & Style Magazine, Jojo and Jordan’s honeymoon phase is already over, and Jojo Fletcher has kicked Jordan out.

An insider dished to Life & Style Magazine, “JoJo can’t trust Jordan and feels she’s been betrayed. So she told him to take his stuff and get out.” Jordan’s ex, Brittany Farrar, was pretty upset that Jordan Rodgers lied on national television and swore up and down to Jojo that he never cheated on Brittany and the rumors were not true. However, recently Jojo finally learned the truth: Jordan DID cheat on Brittany, and now The Bachelorette is furious that Rodgers lied to her about his past.

The tabloid’s source went on to say, “He spent days trying to convince JoJo that the rumors were not true and tried to make it up to JoJo by buying her a diamond bracelet and taking her to fancy dinners.”

Although Jordan Rodgers is still living in Dallas, Texas, he had to get his own place and is reportedly no longer living under the same roof as Jojo Fletcher. Jordan and Jojo haven’t officially announced their break-up, but it looks like it will only be a matter of time before the couple releases a joint statement.

So Bachelorette fans, are you shocked by Jordan Rodgers and Jojo Fletcher’s break-up, or are you shocked that they even made it this long? Do you think there is still any chance of a wedding? Let us know what you think in the comments below and don’t forget to check CDL for all of you’re the Bachelorette spoilers and news.

So excited that launch day of my @diffeyewear frames has finally arrived! For the first 24 hours, you can do TWICE the good because for every pair of sunglasses sold, TWO pairs of reading glasses will be donated to Eyes on Africa. Make sure you get them while they’re hot- just like this cute birthday boy! 🔥 😘#babelookingoooodinmyshades

So proud of this boy right here– Not only is he the most loving, kindhearted and selfless man.. But also unbelievably hardworking and driven. Congrats on your first week w/ the SEC Network bubbi! You deserve it. 😘 @jrodgers11

One of my fav 📸’s by the talented @michelson_ari 💕 @jrodgers11