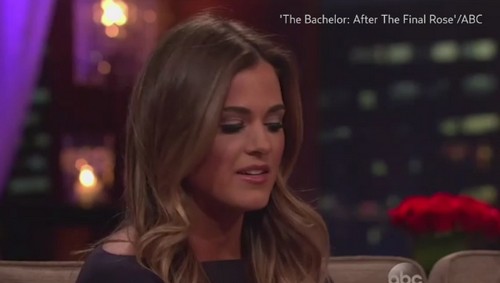 “The Bachelor 2016” runner-up and the next Bachelorette Jojo Fletcher has opened up about what she felt after Ben Higgins led her into believing he loved her and that they were going to be the endgame couple at The Final Rose – and then cruelly picked Lauren Bushnell instead!

Although the wedding plans between Ben Higgins and winner Lauren Bushnell are already underway, Jojo Fletcher is still crying over spilled milk.

Jojo revealed to show host Chris Harrison at the “After the Final Rose” special that her heart dropped when Ben ditched her.

Jojo Fletcher poured her heart out in explaining that she was quite excited in preparing for The Bachelor finale since she already saw herself winning the show, getting engaged to Ben Higgins, and beating Lauren Bushnell by a wide margin.

The 24-year-old even said that she was already seeing her future with Ben as they start living their lives as a couple.

Speaking to the man who broke her heart in the season 20 finale of “The Bachelor 2016,” Fletcher admitted that she felt that she was led on by Higgins. She said, “I felt in that moment that every conversation that you and I had led me to believe that that’s what was going to happen.”

Jojo continued, “So on that last day — and you knew how nervous I was, just telling you how in love with you I was, how excited I was for our future — just to hear that word ‘but,’ I think my heart just dropped.”

Meanwhile, the search for Mr. Right is not over yet for Jojo Fletcher. The Dallas native has already been revealed to be the next title role for the upcoming new season of “The Bachelorette.”

The runner-up for the recently ended “The Bachelor 2016” proudly took to Twitter to share to her followers the good news, saying: “Sending love as the journey isn’t over, it’s only just beginning.”

Interestingly, it seems that Jojo may not really need to go on the show again to get over Ben. CDL previously reported that Fletcher may be involved romantically with Andi Dorfman and Kaitlyn Bristowe’s ex-boyfriend Nick Viall.

The 35-year-old businessman, who also had the hots for Whitney Bischoff, is said to be dating Jojo, and they might have begun their romantic bond just after Higgins dumped Fletcher over Bushnell.

Nick Viall reportedly provided Jojo a shoulder to cry on after the heartbreaking rose ceremony, which aired on March 14. In Touch Magazine revealed recently that Viall and Fletcher have been dating for a couple of weeks now.

Nick communicated with Jojo immediately after learning that the latter was not chosen by Higgins. The rumored lovers even find time to meet up in Los Angeles despite living in different states.

As for Lauren Bushnell, she is said to be living in constant fear that Ben could easily dump her and ditch their engagement and wedding because the latter still has feelings for Jojo. A previous CDL report noted that Lauren is doubting Ben’s commitment ever since he revealed on the reality dating series that he loved Jojo.

The doubts plaguing Lauren may be very strong since insiders are anticipating a split anytime soon. Come back to CDL often for more Bachelor Nation new and gossip!