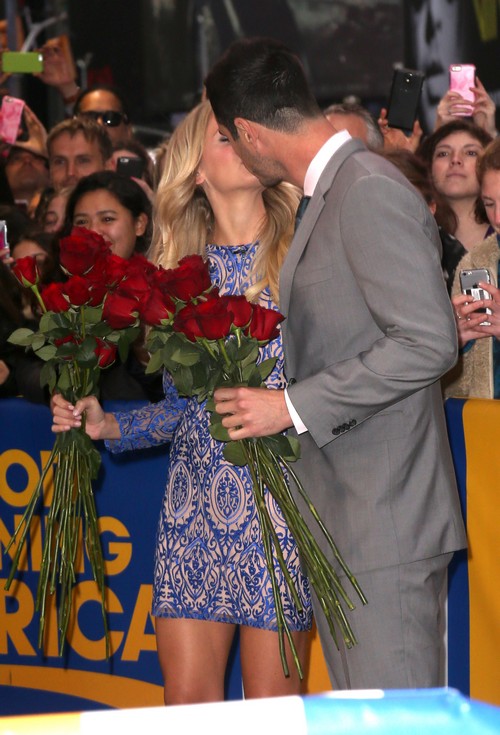 Lauren Bushnell and Ben Higgins are NEVER getting married! Face it, Ben Higgins screwed up telling Jojo Fletcher he loved her for the world to see – and now Jojo will be in Lauren’s face as new The Bachelorette.

Bachelor 2016 Ben Higgins and Lauren Bushnell made their first official public appearance as an engaged couple during the Season 20 finale and live ‘After The Final Rose’ show on ABC. Ben has said on more than one occasion during the show and in interviews that he would “marry his fiancée tomorrow if he could.”

So, Chris Harrison decided to see if Ben would put his money where his mouth is.

During the 2016 Bachelor finale, Chris Harrison announced that he had Ben Higgins’ and Lauren Bushnell’s families flown in, Neil Lane was on hand with wedding bands, and Ben Higgins’ Pastor Denny was on hand from his hometown to officiate.

So, Ben Higgins really could get married right then and there on live television like he had bragged to Chris that he would do.

Chris Harrison really tried to convince Lauren and Ben to get married right there – but the couple couldn’t be swayed, and things got a bit awkward. As Chris pointed out, if they were so in love, their families were there, and they had rings, what was stopping them?

Ben tried to cover up the awkwardness and decided to repropose to Lauren and got down on one knee…again. His attempts to make things less awkward, just made them more awkward, live television is clearly not Ben and Lauren’s forte.

How does one go from bragging that they want to get married tomorrow, to turning down the wedding Chris Harrison set up for them because they wanted to “date” first.

What do you guys think? Are Lauren and Ben sincerely happy or did Lauren make it clear to Ben that she will refuse to marry him? Or was it all a façade? If they are so happy and in love – shouldn’t they have jumped at the chance of a spontaneous live wedding? Let us know what you think in the comments below!