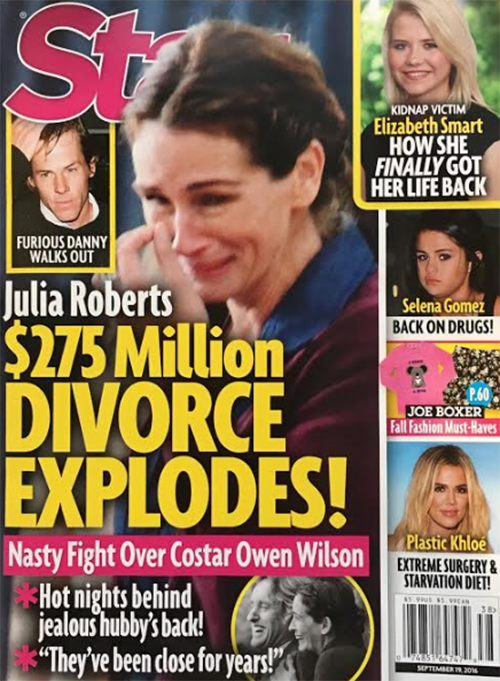 Julia Roberts and Danny Moder’s marriage has been in shambles for the last few years. Unless you have been living under a rock, then you have most likely heard the rumors about Roberts and Moder’s impending divorce. When you are worth over $200 Million dollars, have children together, and have been married over a decade – it’s not as simple as just calling your lawyer and filing papers. And, Julia and Danny seem to be stalling and avoiding the inevitable, a messy divorce and lengthy legal battle.

Once again, Julia Roberts and Danny Moder’s marriage woes and rumored divorce graces the cover of this week’s edition of Star Magazine. But, this time, there is a twist. According to the front page of Star, Julia and Danny’s relationship woes could be the result of the “Pretty Woman” actress getting a bit too close to her former co-star Owen Wilson. The headline reads, “Julia Roberts’ 275 Million Divorce Explodes: Nasty Fight Over Costar Owen Wilson.” According to Star’s cover, Owen and Julia have been “close” for years. And, Julia has had some “hot nights behind her hubby’s back.”

Star Magazine’s inside source dishes, “Julia has been confiding in Owen about her troubles with Danny. Until she figures out her situation at home, Owen will keep some healthy distance. At this point, there just might not be any way to save her marriage.” The insider adds, “They’re constantly flirting, supporting each other, joking. It’s like they are a couple.” According to the report, Danny Moder confronted Julia Roberts about her relationship with Owen Wilson – and all hell broke loose.

Julia and Danny are extremely private about their marriage and family. To be honest, we will probably never know exactly what is going on between the couple. For all we know, they may have split months ago and decided to remain married legally to avoid a messy divorce. Or they could have patched up their problems.

What do you guys think? Do you believe that Julia Roberts has been sneaking around with Owen Wilson? Share your thoughts in the comments below!