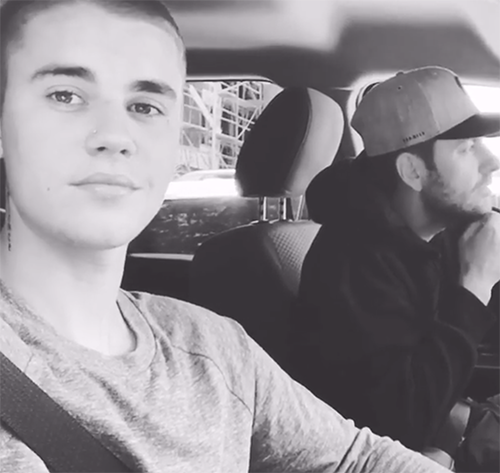 Did Justin Bieber raise the white flag to end the feud with Taylor Swift? Is Justin making another effort to win back Selena Gomez by ending the battle with Selena’s BFF? Backtrack a bit to the Billboard Music Awards 2013 when Selena and Justin – who were exes at the time – kissed backstage. Taylor was none too happy when she witnessed the PDA and was caught on camera sticking out her tongue.

Now to the day after the Billboard Music Awards 2016 when Justin posted two videos to Instagram. Both are brief, but Justin is listening to ‘Teardrops on My Guitar.’ Justin captioned the first video with the word “Drew.” In case you haven’t heard the single, Taylor sings about a mysterious Drew in the song.

In the second video, Justin is listening but also singing along. Okay, it’s more like Justin is lip-syncing the chorus, “he’s the reason for the teardrops on my guitar.”

Is this a shout out to Taylor that Justin wants to put an end to their feud once and for all? If Justin can get back into Taylor’s good graces, maybe the singer will put in a good word for him with Selena? Why else would Justin Bieber listen to a Taylor Swift song and sing along?

We admit, Justin’s social media posts are pretty cryptic unless he’s comparing himself to a caged animal or complaining about fans thinking they’re owed a selfie just because they bought a CD. Justin could just be messing with everyone to stir things up.

Neither Taylor nor Selena takes too kindly when someone’s messing around. Case in point, at a recent concert, Selena took a fan’s sign that said, “Marry Justin,” crumpled it, threw it to the ground and stomped off. Cross Taylor and you find yourself on the receiving end of a scathing hit song.

What’s up? Have Taylor Swift and Justin Bieber put aside their differences and caused a truce? Has Taylor put in a good word for Justin with Selena Gomez?

C’mon, we all know Justin still loves Selena! He admitted it to Ellen DeGeneres less than a year ago while he was out making the rounds of the talk shows to promote ‘Purpose.’ Neither singer could stop talking about the other. Is there a Selena Gomez and Justin Bieber reunion in the works? And all because of Taylor Swift!