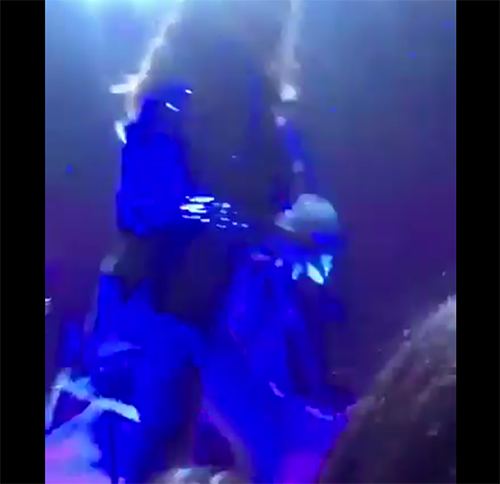 Despite reports that Selena Gomez and Justin Bieber are dating again, Selena has no intention of getting back together with Biebs. And, apparently, she is not a fan of the thought of marrying her ex-boyfriend either. SelGo recently kicked off her ‘Revival’ tour, and performed in Fresno, California over the weekend. Of course, she didn’t make it through the concert without throwing a little shade at Justin Bieber.

There were some diehard ‘Jelena’ fans in the audience while Selena Gomez was performing this weekend, and one of them was holding up a sign that said ‘Marry Justin!’ while Selena was singing. In the middle of her set, Selena reportedly strolled over to the fan and grabbed the ‘Marry Justin’ sign and crumpled it up and threw it on the floor.

It’s interesting that Selena Gomez threw a fit over the Justin sign, seeing as how just last month she and Biebs had everyone convinced that they were getting back together. Not only was Justin posting photos of her on social media again, but she even popped up and surprised him at one of his concerts. Justin made it pretty clear that he wanted Selena back – but that was a month ago. It looks like the tumultuous couple had a change of heart (again).

At this point, it’s impossible to keep track of Selena Gomez and Justin Bieber’s dating timeline. But, we can definitely say that this weekend they are ‘off’ – after SelGo’s little show in the middle of her concert. So, if you are planning to attend a Selena Gomez concert this summer, we suggest not making any signs that mention Justin Bieber’s name – unless you want the singer to destroy them.

Why do you think Selena Gomez crumpled up the Justin Bieber sign? Was she that disgusted, or just putting on a show? Let us know what you think in the comments below!