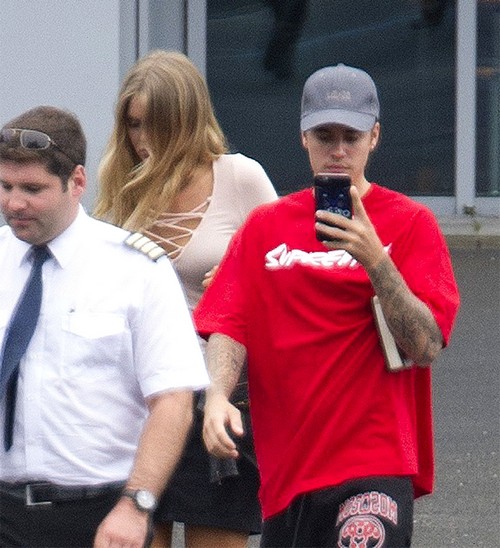 Justin Bieber and new girlfriend Bronte Blampied have made their public debut together only a few days after the singer was linked to his last girlfriend, Sofia Richie. In fact, there’s new speculation that Justin Bieber and Sofia Richie might be done altogether and that the ‘Cold Water’ singer dumped and left her in Los Angeles before heading to Europe.

Justin Bieber’s summer of romances is seeing no end as the chart topper has been linked to a number of beautiful models in less than two months. Even though Justin Bieber deactivated his Instagram account after his fans mocked and bullied Sofia Richie just last week, he’s already dumped her for model Bronte Blampied.

Justin Bieber and Bronte Blampied were spotted leaving Battersea Helipad before heading to the V Festival in London together this weekend.

According to Britain’s The Sun, Justin Bieber is wasting no time with his latest love conquest. He and the model – who also happens to be close friends with Sofia Richie – spend six hours at a luxury spa before his headline set at the V Festival. What’s more, he was also spotted leaving Tape nightclub with the blonde beauty while Sofia Richie was spotted back in Los Angeles looking somber and upset.

Clearly, she didn’t expect her boyfriend Justin Bieber to move on so quickly with one of her good friends while leaving her behind to figure out what went wrong between them.

If that weren’t enough, Justin Bieber was also linked to model Sahara Ray during his getaway to Hawaii earlier this summer while there’s also been rumors of the singer possibly hooking up again with his ex-girlfriend Selena Gomez.

Of course, Justin Bieber and Sahara Ray’s romance only lasted as long as his Hawaiian vacation and a Jelena reunion is yet to happen. And while it seems like Justin Bieber and Bronte Blampied might be getting hot and heavy together, it will only be a matter of time, if not days until the singer moves on with a new girlfriend in his life.

Clearly, Justin Bieber is enjoying his single status along with a good number of no-strings-attached relationships with some of the most beautiful models in the industry right now. Although some fans do believe that Justin Bieber might be playing hard to get with his real love, Selena Gomez, especially after she called him out for lashing at his fans for bullying Sofia Richie.

Tell us CDL readers, how long do you think Justin Bieber and Bronte Blampied’s romance is going to last? Check out our photo gallery below and of course drop us a line in the comments section with your thoughts!

Justin Bieber was seen arriving at Tape Club with his rumored new girlfriend, Bronte Blampied. The London club opened at 2 a.m. exclusively for them and the pair were later seen coming out and going home together. FameFlynet