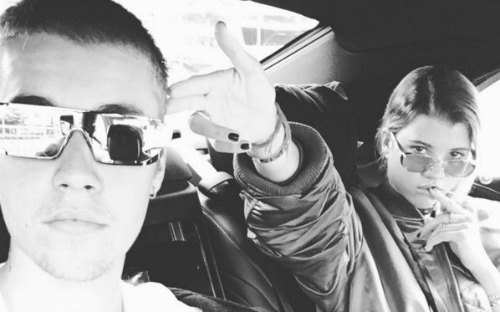 Justin Bieber’s dating life has taken on a new dimension and become a hitherto unheard of phenomenon. Justin Bieber has been hooking up with a number of All-Star girlfriends in the past few weeks including models Sahara Ray, Sofia Richie and Bronte Blampied. And apparently, they have no issues with being in Justin Bieber’s girlfriend rotation. It’s one thing for a man to see several women when they don’t know about each other but Justin is right out there doing it in public and his entire harem is in the know.

Justin Bieber hasn’t had much luck finding true love again after his Selena Gomez break up. In fact, the chart topper has been in a series of short-term hook ups that have also included model Hailey Baldwin and random Kardashian/Jenner ladies.

Justin Bieber has managed to keep his love life afloat by hooking up with a different woman every week and it seems like each girlfriend has no issue with providing him ‘the girlfriend experience’ with the exception of course being Selena Gomez, who clearly hasn’t been able to get over Justin.

Justin Bieber has hooked up with a variety of women for years but is now making this more open and public. Justin Bieber and Sahara Ray’s hook up made headlines when the singer was spotted skinny dipping naked in Hawaii earlier this summer.

Justin Beiber clearly lost interest in the Instagram model pretty quickly before he began his relationship with then 17-year-old Sofia Richie back home in Los Angeles. Many fans assumed that Justin Bieber and Sofia Richie’s romance was the real deal after he pleaded for his fans to stop harassing her online before he deactivated his Instagram account.

Clearly, Sahara Ray, Sofia Richie and Bronte Blampied have no problems being used by Justin Bieber for his satisfactions. The only person of course who would protest being in an open, no-strings-attached relationship with Justin Bieber would of course be his one and only love, Selena Gomez.

While Justin Bieber is having the time of his life exploiting his hook-ups to the public, many fans know that it will only be a matter of time before Justin Bieber and Selena Gomez hook up once again. After all, Justin Bieber will get tired of his model girlfriends, especially since none of them seem to be showing any self respect for themselves.

Tell us CDL readers, do you think Justin Bieber’s girlfriends have accepted his cheating ways? In fact is it really cheating if you do it in public and you know it will be all over the Internet and social media in minutes?

Will Justin Beiber and Selena Gomez ever get back together again – typically Selena tries to get with Bieber when she has a new album or tour coming out – can we expect more of  this shameless famewhoring? Drop us a line with your thoughts in our comments section below and of course check back for all the latest updates on Justin Bieber and all of your favorite celebrities right here.