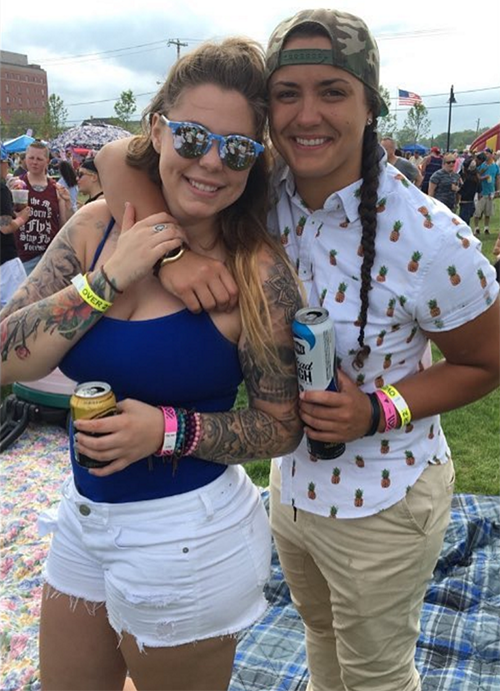 Does Teen Mom 2 star Kailyn Lowry have a girlfriend? Her divorce from husband Javi Marroquin this year suddenly makes a lot more sense. Kail and Javi seemed like the perfect couple, but after four years of marriage, they confirmed this year that they had split after months of divorce speculation. Over the weekend, Kail sent the Teen Mom fanbase into overdrive when she posted photos of herself kissing her new girlfriend.

Years ago, Kailyn Lowry confessed that she was bisexual, and it looks like she was 100% serious. Kail posted photos of herself on SnapChat with her pal Becky, who has apparently been promoted to her girlfriend. Kail quickly deleted the images, but it was too late. Several Teen Mom 2 fans grabbed screenshots of them and they are plastered all over the internet.

Here’s where it gets even more interesting: Kailyn and Becky, the girl in the photos, have been friends for a LONG time. There are actually photos of Kailyn and Becky posing with her husband Javi on her Instagram page from nearly two years ago. So, it’s not like Becky is new in Kail’s life. Interestingly enough, Teen Mom 2 fans were certain that Javi Marroquin was cheating on Kail while he was out of town in the military, but now it looks like Kail may not exactly be an innocent party in their split.

Since the photos of Kail kissing her new girlfriend Becky went viral, the Teen Mom 2 star hasn’t addressed the rumors and speculation. What do you think, Teen Mom 2 fans, was Kailyn Lowry cheating on Javi all along with her “friend” Becky? Do you think that is why the reality TV couple really split? Or did Kail start dating Becky after they decided to get a divorce? Let us know what you think in the comments below!