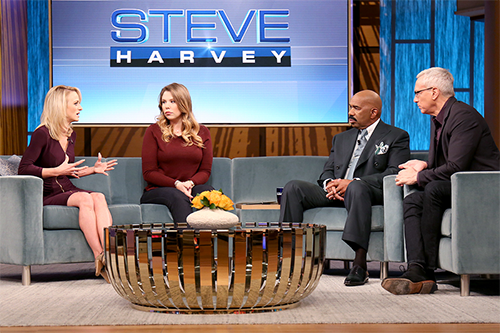 Leah and Kailyn began their reality television journey on the MTV show ’16 and Pregnant.’ The road that followed has not been easy for either young woman. Both have struggled to maintain amicable relationships with their children’s fathers and balance life as young mothers struggling with depression and anxiety.

Leah explains that she made the difficult decisions to seek treatment for anxiety and depression. The people in Leah’s life were not very supportive of her choice. Leah recounts, “I knew I was suffering from something. I didn’t know what it was, I just knew that I was suffering and I needed help.”

Steve Harvey asks Leah the status of the custody battle with ex-husband Corey Simms over their twin six-year-old daughters. Leah and Corey are now able to co-parent effectively. Ever since Messer returned from treatment her daughters look to mom for therapy activities. “We’re in a much better place than we was,” Leah says.

How has fame affected Leah Messer and Kailyn Lowry’s lives? Kailyn explains that people forget that they are human beings with feelings and not just characters on a television show and their comments and criticisms can be brutal.

“Sometimes we just want to be like everybody else and think of ourselves as people who are not on TV and we want to do our own thing, but at the end of the day if we post one picture on Instagram, we might cause World War III with 10,000 comments. You just never know,” Kailyn tells Steve Harvey.

Dr. Drew Pinsky explains the effects social media has on the ‘Teen Mom 2’ stars lives. “These girls came of age, were on TV when social media hit. They were the first sort of reality show, even just television personalities to be the object of social media scrutiny.”