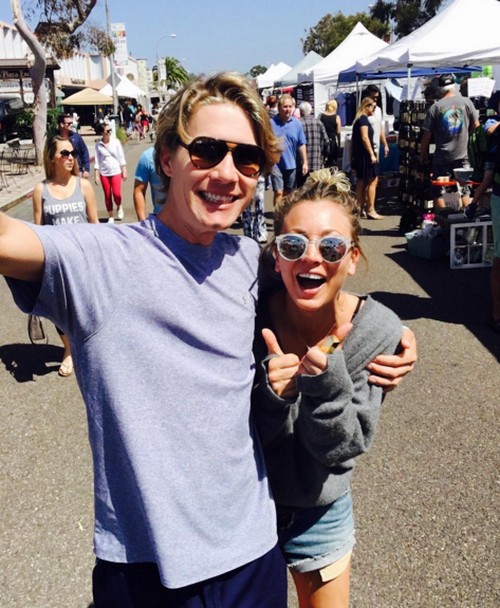 Kaley Cuoco took to her Instagram to share an adorable photo of herself grinning with rumoured new boyfriend, Karl Cook. The “Big Bang Theory” actress, 30, captioned the fun Instagram photo: “Blondes do have more fun :) #sundaze.”

Kaley Cuoco and Karl Cook have been dating and spending a lot of time together these past weeks. According to reports on People, the equestrian-loving couple have still not officially confirmed their affair.

The pair was first spotted together last month attending Bob and Mike Bryan of United States’ doubles match against Rafael Nadal and Fernando Verdasco of Spain during day six of the BNP Paribas Open at Indian Wells, California. Kaley has since been proving she’s infatuated with her new beau via Instagram.
The two have been flooding the photo-sharing website with adorable photos.

“When bae wins it’s a good night for this girl,” Kaley captioned a photo of Cook wearing a medal on April 9. “That’s what happy looks like,” the horse lover captioned another cute photo on April 8.

Cuoco’s split from professional tennis player Ryan Sweeting in September following their 21 months of marriage seem to be a thing of the past for the beautiful actress and she clearly is moving on with her life after filing for divorce.

“It does not change the way that I look at love,” the “Charmed” star told Cosmopolitan of her split from her ex-husband, Ryan Sweeting. “I cannot wait to be in love again,” Kaley added.  “I don’t feel like I am ready yet … which is so different for me. I dive into everything,” she continued.

Kaley is fully aware that things don’t always go as you want them to, but that’s absolutely okay with the gorgeous actress: “I thought I’d have a baby by now! You see your life going one way, and then it’s the direct opposite way. I’m waking up going, Oh my God, my life just flipped upside down.”

Kaley also opened up to Cosmopolitan for its April issue and addressed speculations hinting a rekindled romance with Johnny Galecki, her ‘Big Bang Theory’ co-star whom she broke up with in 2010 after dating for nearly two years.

“Johnny and I are very close now,” she said. “But the worst part about that is I don’t want stories like that, especially during this divorce, to hurt my ex,” she added.

“We have nods with each other. Johnny and I do this thing like a nod that says, ‘I got you. I get it,’ Kaley said.

The former couple have taken to social media several times recently in order to slam rumours and defend their rapport with each other.

Well, if her lovey-dovey photos with rumoured new boyfriend are anything to go by, Kaley has clearly moved on with her life and we couldn’t be happier for her.

Do you think Kaley Cuoco and Karl Cook are actually boyfriend and girlfriend? Share your thoughts in the comments below!

Season 9 finale this week 👊🏽 @bigbangtheory_cbs @sanctionedjohnnygalecki thank you to everyone who made this possible! We are extremely humbled and grateful 💗