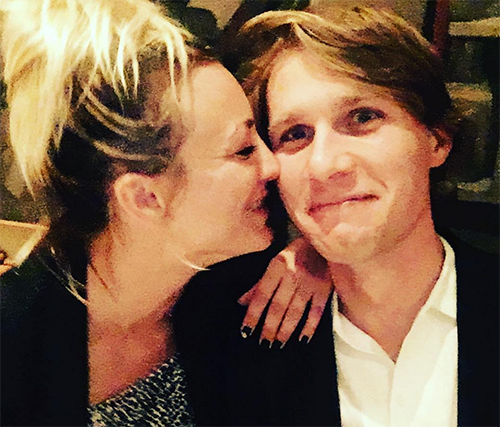 Is Kaley Cuoco really quitting ‘The Big Bang Theory’ after nine seasons? Has Kaley’s new romance with Karl Cook made it uncomfortable for co-star and former boyfriend Johnny Galecki to work with Kaley? Why would Kaley give up her $1 million per episode salary just because Johnny might be jealous of Kayley’s new love? If Johnny is so uncomfortable, maybe he should quit The Big Bang Theory?

According to Kaley, the talk about her leaving the number one rated comedy is completely untrue. “The look I give when I hear rumors about myself leavin @Bingbangtheory_cbs isn’t happening. Never gonna happen. Won’t happen. Here till the end ya’ll,” Kaley posted on Instagram. The accompanying photo is of a shocked and surprised Penny with the caption, “WHAT?!”

When Kaley filed for divorce from Ryan Sweeting after only 21 months, there was a lot of speculation that the actress was dating Johnny again. Some went so far as to say Johnny broke up Kaley and Ryan’s marriage. Of course, Kaley and Johnny denied it! The co-stars even went on Instagram to dispel the dating buzz.

Country music singer Sam Hunt came into the picture not long after Kaley’s split from Ryan. They allegedly hooked up at a Grammy after-party. If Kaley Cuoco and Sam Hunt were together, it was for a hot minute.

Now we see model Karl Cook has crept into Kaley’s life. Over the past several weeks, Kaley has posted a few PDA photos on social media. One the actress captioned, “That’s what happy looks like.”

As far as we can see, Kaley’s ‘The Big Bang Theory’ co-star have no romantic prospects. If Johnny Galecki does have someone special, he isn’t sharing any PDA pics on social media. But that shouldn’t surprise anyone. Johnny and Kaley dated for years and the public didn’t know about it until they broke up.

Do you really think Kaley Cuoco or Johnny Galecki is going to give up a huge paycheck simply because a significant other makes them uncomfortable? Neither Kaley’s nor Johnny’s careers outside of ‘The Big Bang Theory’ have been noteworthy.

Besides, Kaley doesn’t seem to stick with one guy for very long. No need to get all upset over a fleeting romance. Karl Cook could just be the flavor of the month.

Kaley Cuoco is all smiles while attending a yoga class in Sherman Oaks, California with a friend on May 2, 2016. Kaley couldn’t seem to control her excitement after her friend gave her some framed art.