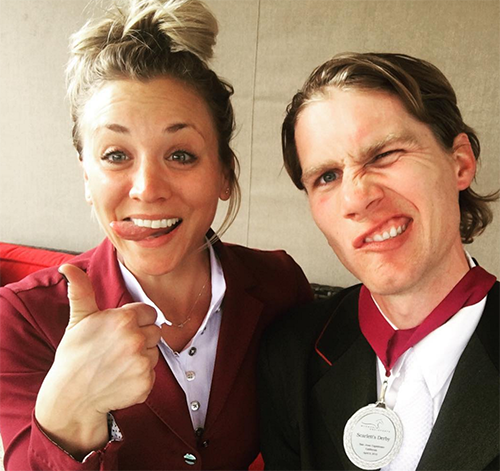 Are Kaley Cuoco and Karl Cook getting married? Just a few weeks ago, The Big Bang Theory actress confirmed she had a new boyfriend, Karl Cook, not long after her divorce to Ryan Sweeting was announced. Kaley didn’t waste much time diving back into the dating pool, and since going public with their relationship, TBBT actress and Karl Cook have been PDA-ing all over the place.

According to a new report from Star Magazine, Kaley Cuoco is already planning her next wedding! The tabloid is reporting that Kaley was spotted ogling bridal magazines. An eyewitness spotted Karl and Kaley out to lunch in Los Angeles recently and dished to Star, “They flipped through them all, cover to cover, and commented on which dresses looked the best.”

Seeing as how the signatures on her divorce papers are barely dry, we can all agree that it is a bit too early for Kaley Cuoco to be planning her next trip down the aisle. Although, we wouldn’t put it past her. For those who don’t recall, Kaley Cuoco shocked the world when she confirmed that she had married tennis pro Ryan Sweeting after a whirlwind three month long courtship. So, shotgun weddings are kind of Kaley’s thing. And, Karl Cook doesn’t exactly seem to be dragging his feet any – the couple has been breaking ground at a record pace.

One thing is for sure, if Kaley Cuoco is rushing into another marriage, there is a very decent chance that another divorce is right up her alley as well. On the upside, Ryan and Kaley’s split was rumored to have something to do with his lack of funds and work. Kaley was tired of carrying the weight for her husband. And, Karl Cook doesn’t have any problems in the money department.

What do you guys think? Is Kaley Cuco planning another wedding? Share your thoughts in the comments below!