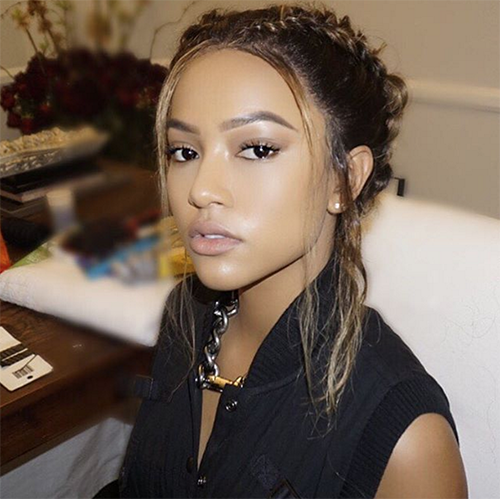 There is apparently one upside to sleeping with Chris Brown – you get invited to join the reboot of America’s Next Top Model on VH1. According to a new report form Page Six, Brown’s ex-girlfriend, Karrueche Tran, is being considered as a judge for The CW reboot when it returns to the airwaves on VH1. It was revealed earlier this year that Tyra Banks was finally retiring and the lengthy reality TV show was being axed. However, VH1 swooped in and has decided to give the show a fresh and hip makeover.

According to Page Six’s insiders, Karrueche Tran is at the top of a list of possible judges for America’s Next Top Model. Believe it or not, Tran actually wasn’t just Chris Brown’s ex-girlfriend, she also has worked as a model and personal stylist, and recently released her own make-up line.

There has been a lot of buzz over VH1’s reboot of America’s Next Top Model, and word on the internet is that Kendall Jenner may be the host (that is if her BFF Gigi Hadid doesn’t steal the gig from her). Ironically, word on the internet is that Kendall Jenner has been spending a lot of time with Chris Brown as of late, and supposedly she has been secretly dating Karrueche Tran’s ex-boyfriend. That could make for some awkward conversations on the set of the reality TV show.

So far Karrueche, Kendall, and Gigi are the only names being tossed around. Tyra Banks is serving as one of the producers on the VH1 reboot of ANTM, so she will have some say in who joins the cast and who does not. It could be Chris Brown’s worst nightmare if Karrueche and Kendall start working together!

Are you excited for the big return of America’s Next Top Model? Would you like to See Karrueche and Kendall on the cast? Let us know what you think in the comments below!